The original Mary Poppins, which came out in 1964, was a near-perfect blend of fantasy and music. Julie Andrews and Dick Van Dyke tripped the light fantastic and showed us how a family film should be. Fifty-five years on the world is a vastly different place. Expectations have changed. Technology has morphed. Children expect sophistication. So to Disney’s Mary Poppins Returns, an all-new original musical and yet a sequel. The practically-perfect nanny whose unique magical skills can turn any ordinary task into a fantastic adventure is back. Now she’s here to help the next generation of the Banks family find the joy and wonder missing in their lives following a personal loss. 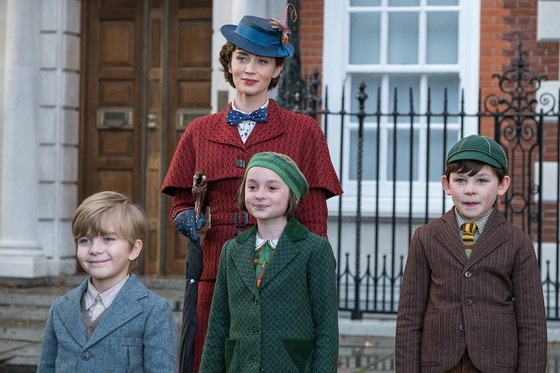 Set in Depression-era London (when the books were originally written), Michael Banks (Ben Whishaw) – now a grown man with a family of his own – has taken a temporary job with a London bank. The same financial institution employed his father and grandfather before him. He lives with his three children – Annabel (Pixie Davies), John (Nathanael Saleh) and Georgie (Joel Dawson) – at 17 Cherry Tree Lane, but times are tough. The city is in the midst of “The Great Slump”. Money is tight and the accompanying stress, unavoidable. On top of that, the family is struggling to cope with the recent death of Michael’s wife. The house is rundown and in a constant state of chaos, despite the efforts of their inefficient yet well-meaning housekeeper, Ellen (Julie Walters).

Michael’s sister Jane (Emily Mortimer) helps out when she can. But she’s inherited her mother’s enthusiasm for good causes and campaigns for workers’ rights, which keeps her busy. With the harsh reality of the times and the burden of their loss weighing heavily on the family, the children find themselves taking on adult responsibilities, growing up much too fast. As a result, childlike joy and wonder are missing in their lives. As Michael’s relationship with his children continues to deteriorate, the bank’s seemingly altruistic Mr. Wilkins (Colin Firth) begins foreclosure proceedings on the Banks’ home. Not surprisingly, that sends the already frazzled Michael into a further tailspin.

Fortunately, the wind begins to change as Mary Poppins (Emily Blunt) enters the lives of the Banks’ family once again, having not aged a single day. She teams up with an old friend, Jack (Lin-Manuel Miranda), a charming and eternally optimistic lamplighter. Together they take the Banks’ children on a series of whimsical adventures.

Among the most colourful of characters is Mary’s eccentric cousin, Topsy (Meryl Streep). Incidentally, in addition to playing Bert in the first film, Dick Van Dyke also filled the role of Mr. Dawes, the chairman of the bank. Now he returns, playing that character’s son, Mr Dawes Junior who had taken his father’s place as chairman of Fidelity Fiduciary Bank, but has recently been forced to retire. And Angela Lansbury makes an appearance as a balloon lady who holds court in the park near Cherry Tree Lane, selling the inflatables and dispensing wisdom to park visitors.

Mary Poppins Returns is directed by Rob Marshall (Chicago) from a screenplay by David Magee (Finding Neverland). The movie has charm, humour and a decent storyline. Of course it makes sense to move on to the next generation of the Banks’ family, as well as trying to re-engage the now second generation. The songs are light and peppy, and the production values strong. Emily Blunt, Lin-Manuel Miranda and the other key actors give us their all.

For all that though, I’m afraid I didn’t get the same magic I did from Mary Poppins. It felt long (even though at 2 hours 10 minutes, it was nine minutes shy of the ‘60s film) … and predictable. On occasions, I viewed the music as an irritation – not so in the original. Mind you, there was one magnificently choreographed number involving chimney sweeps that did stand out in Mary Poppins Returns.

I was left wondering about who the film would appeal to. Perhaps little girls? Maybe youngsters who haven’t seen the original? Disney has stepped back in time in re-creating the world that was. But I suspect we’ve moved past that and Mary Poppins didn’t really need to return.