Greg McLean’s (Wolf Creek) latest film, Jungle, is based on the international best-selling memoir by Yossi Ghinsberg. This is a true story of survival against all odds.

The year is 1981. Twenty-two year-old Ghinsberg (Daniel Radcliffe) has finished his mandatory Israeli military service. He’s working odd jobs and selling his worldly possessions to fund the adventure he’s long dreamed of. He wants to find an undiscovered Amazonian tribe. His dream is inspired by Papillon (which was adapted into a film in 1973, starring Steve McQueen and Dustin Hoffmann). In any event, Ghinsberg’s aspirations greatly disappoint his father, a Holocaust survivor. He wants his son to study law and focus on more realistic ambitions. 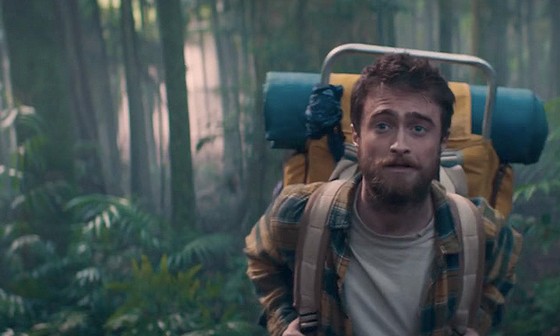 After traveling across South America for a year, Ghinsberg reaches the shores of the enigmatic Lake Titicaca in Peru. There he forms friendships with two other young backpackers: the gentle Swiss, Marcus Stamm (Joel Jackson) and the confident American, Kevin Gale (Alex Russell).

The trio head for La Paz, Bolivia. Ghinsberg is drawn in by a mysterious Austrian adventurer, Karl Ruchprecter (Thomas Kretschmann), who bewitches him with the promise of a journey into uncharted territory. Ghinsberg convinces Stamm and Gale to delay their flights home and to join him on the trek. He reckons it will take them no more than a month. As they say, the best laid plans of mice and men…

Magnificent aerial shots of the jungle are my one positive take away. Stefan Duscio (The Mule) is the cinematographer.

But there is so much wrong with this film, I struggle to know where to start. The acting is so exaggerated as to appear almost amateurish. It is pushed beyond the point of any credibility. I thought some of it was a joke. That began with the introduction of the central characters. Their enthusiasm was way over the top and felt affected.

In spite of the tension the filmmaker tries to build, it turns out to be a very, very dull affair. The elements of supposed tension were short-lived vignettes, rather than carefully manicured scenes. Many of the “dream” sequences simply don’t work. Again, authenticity is severely lacking. Finally, the sound mix is disturbing – music and natural sounds drown out some of the dialogue.

I walked away deeply disappointed. I’m convinced the story could have been well told, but the drums aren’t beating in this jungle. It scores a 3 out of 10.