The creator of and actors in Italian American Reconciliation, which premiered off Broadway in 1988, seem to have forgotten the adage “less is more”.

Aldo (Josh Massarotti) is a larger than life character – a single Italian American – who hasn’t seen his best mate Huey (Dean Gunera) for a while, so he calls around to his place … only to find him in a bad way. He’s taken the phone off the hook, is writing gibberish and wearing clothes Zorro would be proud of. He has been dating the kind-hearted Teresa (Adele Elasmar), but he has lost his mojo.

Huey has it in his head to try to reconcile with his ex-wife, Janice (Natalia Nespeca), who departed the scene more than three years ago. Aldo can’t believe it because Janice treated Huey badly, having shot his dog and tried to shoot him. Nevertheless, Huey hatches a plan – also involving Aldo – to give Teresa her marching orders and win Janice back.

The play by American John Patrick Shanley* is overwritten (it is far, far too wordy), laborious and overacted. And the words that are spoken lack substance. The first act, which lasts for 45 minutes, could easily have been dispensed with in 20.

The chief culprit of exaggeration is the excessively effusive lead Massarotti. Mind you, all suffer from pushing too hard and/or wooden performances. The dialogue, such that it is, should flow and be expressed far more naturally. Really, the only high point before interval comes when Aldo reveals his hairbrained idea to subvert Huey’s plan.

After the break, following a promising start to a balcony scene (which is hardly Romeo and Juliet), I am afraid the play just gradually petered out … and that took the best part of an hour. Again, there were simply too many meaningless and repetitive words.

I was left with an empty feeling … and thought of one of Shakespeare’s works, Much Ado About Nothing. In all honesty there wasn’t much to like, other than a few cute one liners. The whole thing felt contrived, forced and tedious. 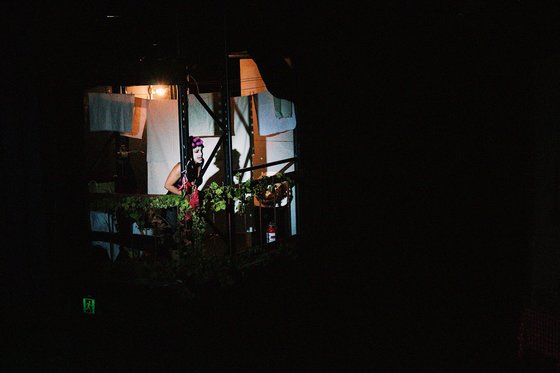 I believe the choice of play for Lab Theatre, now resident at Alex Theatre, was simply wrong. Directed by Peter Kalos and also featuring Francesca Arena as Aunt May, Italian American Reconciliation is on until 29th February, 2020.

* My thoughts about this play notwithstanding, Shanley won the 1988 Best Original Screenplay Oscar for Moonstruck and the 2005 Pulitzer Prize for Drama and Tony Award for Best Play for Doubt: A Parable.