Samuel Langhorne Clemens – a.k.a. Mark Twain – visited Australia in 1895. Advertising posters labelled him the funniest man in the world and audiences loved his sense of humour. Chris Wallace, the man responsible for the book, music and lyrics in Huckleberry: A Musical Adventure, isn’t credited. But he “frocks up” as the great man and regales us with the adventures of Huckleberry Finn.

This is a re-imagining of Twain’s masterpiece, with women playing two pivotal roles as males – one Huckleberry Finn and the other Tom Sawyer. Rather than simply speaking about Huckleberry’s exploits, Wallace, as Twain, invites four actors onto the stage who recount his adventures in word and song. Wallace intervenes at various junctures as the story moves along. 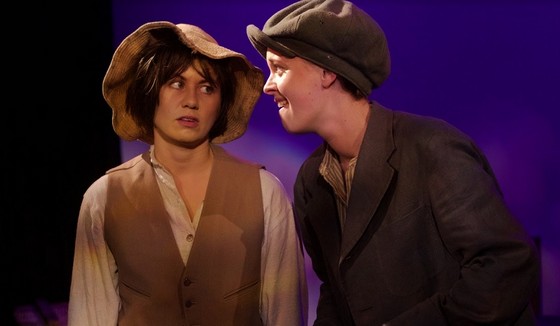 The Adventures of Huckleberry Finn, published in the US in 1885, is commonly named among the great American novels. A considerable time in the production is spent fleshing out the trials and tribulations Huckleberry faces as he sails along the Mississippi River with a black slave, Jim, who regards Huck as his best friend. Mind you, that’s not before the young adventurer escapes from the evil, exploitative clutches of his seemingly all but permanently sauced father, Pap.

And before that, Huck gets into mischief with his mate Tom Sawyer, who comes back into the piece much later on.

Tess Branchflower has a real presence and a pleasant voice as the title character. She is, not surprisingly, the dominant figure throughout and carries the show with aplomb. Tess Walsh, who plays Tom Sawyer and an Illinois woman, may not be as prominent, but when called on, excels.

Having escaped from slavery, Jim is constantly at risk of being exposed. Sami Weleda’abzgi imbues in him a dutiful but vulnerable quality. And finally there’s Sawyer’s good-for-nothing father Pap and the charlatan Duke, both portrayed by Monty Burgess.

Since coming to live in Australia in the mid-‘90s, American Wallace been straddling two cultures.  With a lifelong passion for Twain, Wallace saw a way to merge them when he became aware that the writer appeared in several places in Australia during a round-the-world lecture tour in the late 19th century.  He created a one-man show titled The Mark Twain You Don’t Know, consisting of pieces published posthumously or never meant to be published at all. 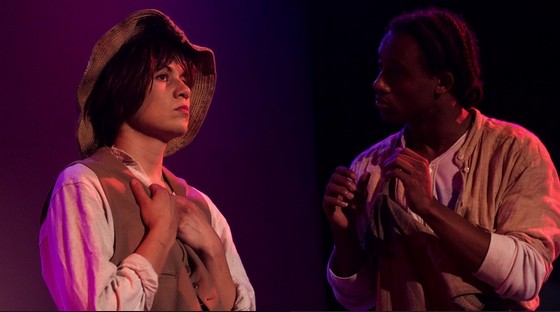 It premiered at the Mechanics Institute in Ballarat in 2004, a venue where Twain lectured in 1895.  Wallace later decided to add a second act: a mini-musical version of Huckleberry Finn. Further down the track, the full-blown Huckleberry musical began to emerge.

As someone who wasn’t familiar with the material, I found the musical play – broken into two 45 minute acts – informative and engaging. It felt like I was leafing over the pages of a book. it was as if I had just been dropped into the midst of a boy’s own adventure, as chapter after chapter unfolded, with peril and hijinks at every turn.

It is, indeed, a throwback to a bygone era when the simple pleasures in life – such as reading a well-thumbed novel – were all one needed to while away the hours. Huckleberry: A Musical Adventure is playing at Chapel off Chapel until 9 December 2018.