Home is a work created by Geoff Sobelle through workshops and residencies in four American institutions: MANA Contemporary (Jersey City, NJ), BRIC Art House (Brooklyn, NY), Pennsylvania State University (State College, PA), and ArtsEmerson (Boston, Philadelphia). Home premiered at the 2017 Fringe Festival (Philadelphia) and has been travelling the International Festival Circuit since, including the Edinburgh Festival, the Brisbane Festival and a stint in New Zealand. Now in Sydney.

A group of seven actors led by Geoff Sobelle (who, also, is a performer) – directed by Lee Sunday Evans, with scenic designer, Steven Dufala and song composer (and performer) Elvis Perkins –  present “a magical meditation on the meaning of home: What makes a house a home?” 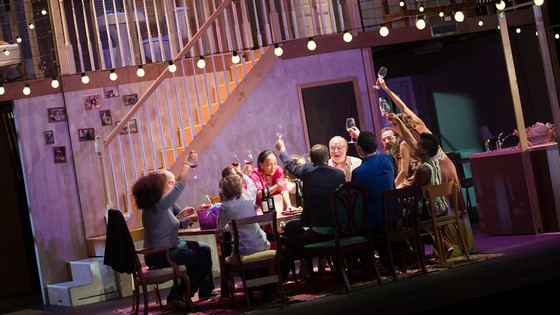 Beginning on an empty stage, an actor enters from the audience, wanders across the stage and sets up some industrial lighting to assist him in constructing a three-framed wall for a house. Once standing he slides it sideways to reveal a small bedroom ‘house’ that through illusion becomes occupied by a number of different people. That house disappears and a two story multi-roomed apartment house appears in its place. It, too, becomes occupied by many different people, not related, who go through the rituals of living – sleeping, showering, toileting, cooking, cleaning, washing, reading, writing, etc – in this domestic environs. Over time the decoration of the house is altered and grows and we are invited to watch the usual cultural benchmarks of the urban citizen marked, those that intrude from birth to death. The seven actors play multi-characters demarcated through swift change costume. There is no text, just well-timed choreography. This house becomes a home, with the simple magic of this company before our gently ‘bewitched’ eyes.

This house becomes a home, even more so, when it becomes occupied by members of the audience, at the invitation and coaching of the company, to partake in those usual celebrations of life. The audience members are given ‘silent’ (whispered) instructions that gives them roles and functions in the complex scenography of this theatre event. The magic is that these 10 or 20 people (no kidding) become ‘real’ within the action of the unfolding of the theatrical strategy with the actual performers: they bring bottles of wine, presents, they participate in many different recognisable scenes in the life of the contemporary audience: dancing, celebrating (even a same sex wedding – the audience applauded), loving, quarrelling. The passing of time is registered through the appearance of the great landmarks of urban living, a baby is celebrated, a later birthday celebrated, and even the Grim Reaper joins in so that a wake is, too, celebrated. The costume changing is immense and subtle in its weltering confusions.

Further, the party spills out into the auditorium with the spreading of light decoration across the whole theatre space through the manual manipulation of the seated audience, we even sing a happy Birthday to one of the audience ‘players’, Jo. Surreally, two members of the recruited ‘actors’ are sat at tables with microphones and are invited to vocally reminisce about their own childhood homes, both at the same time, while other events of ‘mimed’ human-interaction continues about them. It’s a deliriously joyful wonder when a four piece band appears on stage and joins the mayhem as the climax of this organised chaos. Magically, there is a gentle descent into the aftermath of a party with the leaving of the guests and, poignantly, the house is emptied of all its human occupiers and in the closing minutes of the performance a deserted and abandoned house with flapping plastic sheets ghosting in the space, signals, perhaps, calamitously, the urban blight, detritus, of the human animal on the landscape. The wilful abandonment of human constructs across the earth. When as a species we are extinct will this be our gift to what follows? One comes to understand the temporal life of the animal in the face of nature as the Darwinian Theories, perforce, move on through time. Nature always survives, in one manner or another. 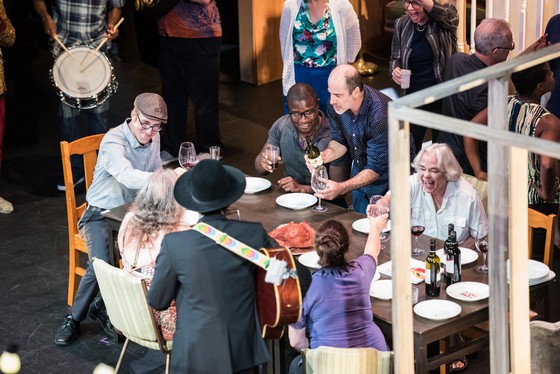 Elements of Simon Schama’s 1995 book: Landscape and Memory, wafted through my experience consciousness. Recently moving home I have wondered who else has lived in these new walls I am now occupying. The layers of their presence present, the ‘ghosts’ shifting through these spaces in the fascination of the “time” theories, I have read of – “string theory” etc. The archaeological strata of the great cities of Rome or Istanbul with the revelation of the construct of the many houses, one on top of the first, of the second of the … through the thousand of years of human occupation, as these cities seek to build (mundanely) an underground transport system, crept into my thinking as I watched. We are told that “Geoff Sobelle created Home after discovering different layers of kitchen floor, each laid by different residents, in his 100-year-old house.” Imaginatively, then, escalate our species’ history-impact on the planet, from that kitchen linoleum, to the haunting of the abandoned cities of past civilisations across the world, even of the relatively recent Chernobyl landscape.

Inspired by that ordinary discovery of the layers of linoleum on a kitchen floor this company has created a meditative piece that is a delight not only in its philosophical surprises but humorously, dramatically, through the conjuring magic of the manner of its audience inclusion-in-action to invent this world. Sophisticated illusion-magic in many hues transports the audience into a surrender to a delirious indulgence of delight, that may also conjure a spirit of insight and warning.

This is a Festival event for all the family. Geoff Sobelle’s Home hits home, at many levels. It certainly did for me. Do go.