It is quite possible that every generation needs its own version of High Fidelity to hit the screen.  Very broadly based on the 1995 Nick Hornby novel of the same name, this new adaptation is also set in a record store, Championship Vinyl, chronicling the relationship heartbreaks of its young and determined owner, the adorable Rob. 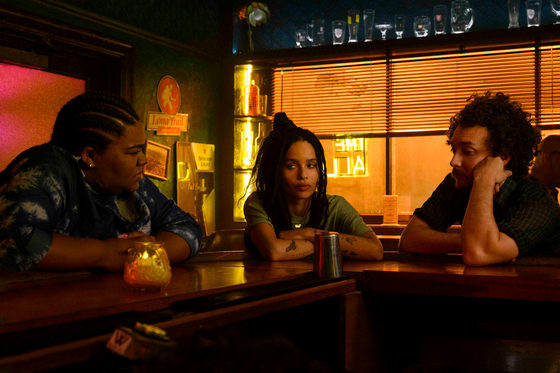 Pufferfishers (likely to be mostly Generation X viewers) may need to check their outrage at the door with the gender flipping employed to freshen up High Fidelity for an age of smart phones, greater representation and faster changes in pop culture.  The mixtapes (curated playlists, for any Gen Z’s reading) still feature as a way of illustrating mood and intent, as does the back and forth arguing over musical integrity between the staff and any poor customer who dares question the three who work at the store.

Central character Rob (the magnetic Zoe Kravitz) at the beginning of High Fidelity is in tears as yet another boyfriend efficiently vacates himself from her life.  Mac (Kingsley Ben-Adir) is now number one in Rob’s lists of top 5 heartbreaks, elbowing out some worthwhile contenders who turned out to prefer their own gender, bad standup comedy or the next woman that came along.  Rob determines that in order to achieve clarity as to why this keep happening to her, she will need to face once more all those who broke her hopeful heart in the past.

The life and times of the extremely musically well informed Rob, require much rumination, some of this addressed to the screen side eyed and unseen by other characters present. The sad and often sarcastic Rob has some pearlers to deliver about how rubbish she is at making real connections and she is also not shy about running commentary on the people in her life either.  Rob’s musical greats may sometimes pop up also by way of fade out music or in the flesh (good to see you Debbie Harry) and of course it’s a movie set in a vinyl store, so the soundtrack requires close attention.

This is one show where you are going to have to dig in more than a couple of episodes for the good stuff, particularly if you know you will be comparing this 2020 outing of Hi Fidelity to the much adored 2000 movie directed by Stephen Frears. Rotating the formula to be more female centric of course deletes all the bromance humour (can’t help but think back to the dynamic pairing of John Cusack and Jack Black)  and offers up instead what can be harshly and truthfully relayed via a foul mouthed best female friend Cherise (Da’Vine Joy Randolph) and Rob’s winsome ex Simon (David H. Holmes), who somehow stayed in Rob’s life post breakup (he’s number three in the breakup list).

High Fidelity, 2020 style, is an earnest production that does however come across as a little too cool for school.  Kravitz as Rob is anything but a dorky lovelorn New Yorker,  appearing to wince at some of her lines as she doubtfully delivers them. The repartee between Rob and her two friends is often savage and curiously dated (does anyone still say ‘dude’?) and though quirky and shot out at a blisteringly fast pace, is rarely funny.

It helps if you view High Fidelity more as a single persons drama rather than as a comedy.  The musical content needed to be amped up (yes, that was intentional) a lot more to appeal to music heads who may have tuned in for some niche hobby validation.  High Fidelity is an amiable drama worth watching just for Kravitz, and will grow on the viewer over time as it did for this reviewer. We really want to find out if Rob ends up finding happiness with another or achieves a state of happiness by becoming content at being on her own for awhile.

High Fidelity is a ten part series able to viewed now in its entirety on ABC iView.