Talk about throwing the kitchen sink at a movie – it appears the filmmakers behind Guardians of the Galaxy Vol. 2 have pulled together every cockamamie idea they could think of and left it there on screen for the world to see. The heart of the story is a familial relationship concerning a megalomaniacal father, but that is but one of the threads explored between this disparate bunch of universal protectors.

Created by Arnold Drake and Gene Colan, the Guardians of the Galaxy were introduced in comic book form in 1969 as a team of heroes in the 31st century, each member the last of its kind. Marvel’s first Guardians movie (2014) also showcased this eccentric group of egotistical “unsuperhero”-like characters, thrown together and tasked with saving the entire galaxy.  For chapter 2, writer/director James Gunn wanted to deliver a story that saw their respective personas evolve. 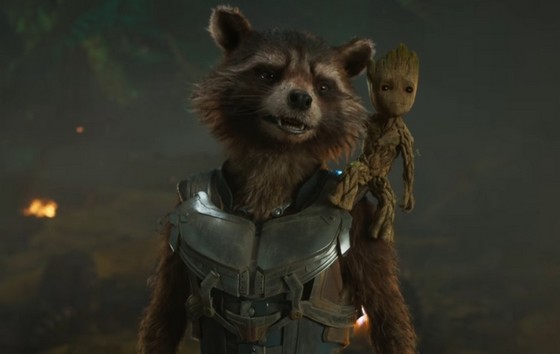 Having successful completed rescue mission number one, the half-human intergalactic adventurer known as Star-Lord, Peter Quill (Chris Pratt) is desperate to know who his father is.  But when he finds out, his dad’s true nature is terrifying (he is aptly known as Ego, as played by Kurt Russell), leading to a deadly confrontation. Speaking of deadly, green-skinned former assassin Gamora (Zoe Saldana) hopes that her heroic deeds with the Guardians will help her atone for her past sins. But she must grapple with her own demons and the consequences of her flight from Thanos’ employ when confronted by her adoptive sister, the galactic fugitive and cybernetic warrior Nebula.

Last seen fleeing from the battle over Xandar, Nebula (Karen Gillan) still harbours a deeply seated grudge against Gamora. When the two cross paths again, Nebula is out to extract revenge. The genetically augmented mechanical genius/woodland creature, the raccoon known as Rocket (as voiced by Bradley Cooper) – with his less sociable impulses – is uneasily thrust into the role of caretaker. His best friend Groot (the voice of Vin Diesel) is but a sapling. While adorable, his lack of understanding of the worlds around him can, at times, be a major obstacle. The unscrupulous Yondu Udonta’s (Michael Rooker’s) control of his band of marauding Ravagers is tenuous at best. After one concession too many, Yondu must fend off a mutinous challenge to his leadership and fight alongside the Guardians of the Galaxy to reclaim his Ravager honor. And Dave Bautista is back as the physically intimidating, tattoo-covered Drax, as menacing as he is lovable, blissfully unaware of his extreme literal nature.

The most important newcomer is a strange insect-like alien, known as Mantis (Pom Klementieff), who was raised alone on Ego’s planet and has empathic abilities. It took me a long time to warm to this second instalment because much of it is just downright silly, but, in time, my reservations lifted (probably when I just decided to go with the flow, wherever it led). While none of it made a whole lot of sense (in fact, on many occasions I thought it was akin to a series of vignettes thrown together), the tongue firmly planted in cheek humour … the irreverence remains largely endearing. So too the strange creatures and characters that populate this futuristic blancmange of a universe – they really are a ragtag bunch of irreverent reprobates.

Really though, the best thing about Guardians of the Galaxy Volume 2 is the seriously wicked soundtrack, which was a nostalgic look back at the songs which shaped me. This is one mixtape that cannot be faulted. From ELO’s “Mr Blue Sky”, through The Sweet’s “Fox on the Run”; Fleetwood Mac’s “The Chain” and George Harrison’s “My Sweet Lord”, to Looking Glass’s “Brandy (You’re A Fine Girl)” and Jay and the Americans’ “Come a Little Bit Closer”; alongside Cat Stevens’ “Father and Son”, it is pure genius.