Neil Jordan was a big name in the 1990s. Movies like The Crying Game and Interview with the Vampire made him a household name. Since then his output has been a little patchy, but now he’s back with Greta, a film with a crafty premise and a great cast. The problem is that Jordan’s direction appears to be stuck in the 90s. 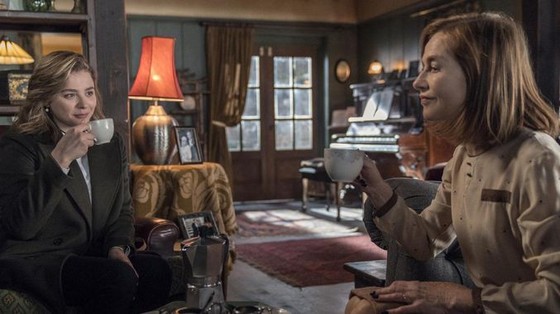 Jordan collaborated with Ray Wright on the screenplay, and it starts out promisingly. After a while though the improbabilities mount up. More disappointingly, the script’s shocks are so well telegraphed, they tend to drain the film of tension, rather than ramping it up. Not ideal in a thriller.

It’s contemporary New York City. Frances Cullen (Chloe Grace Moretz) has moved to the city from Boston following the death of her mother. She lives downtown with her friend Erica Penn (Maika Monroe). Every day Frances takes a long subway ride uptown to wait tables at an upscale restaurant. One day, she notices an expensive handbag left on a train seat. With no one at the station to leave it with, she takes it home. When Frances and Erica examine the contents, they find a wad of cash and a driver’s licence with the owner’s name and address.

While Erica wants to simply keep the cash, Frances insists on giving it back. That takes her to Brooklyn and the home of Greta Hedig (Isabelle Huppert). Greta is a middle-aged French lady with a bo-ho apartment and a love of dogs. When Frances offers to help Greta pick out a dog to adopt, Greta graciously accepts. Soon the two are friends. But one night Frances makes a shocking discovery that calls Greta’s motives into question.

Once the critical turning point arrives, Greta devolves into a pretty conventional thriller. While Jordan and Wright pile on the twists, most of them are pretty obvious. And some are quite silly really. But Jordan adds to the air of faint absurdity by overdoing just about everything. From the heavy-handed use of music to some pretty fruity dialogue, he really lays it on thick. This kind of approach might have worked 20 years ago, but it feels stale now.

Greta’s greatest asset though is the interplay between acclaimed French veteran Isabelle Huppert (The Piano Teacher) – who’s brilliant as usual – and rising star Chloe Grace Moretz (The Miseducation of Cameron Post). Their relationship morphs several times over the course of the film and both actors handle the material adroitly. Stephen Rea, who appeared in The Crying Game, makes a brief cameo here as a private detective. However, Maika Monroe (Independence Day: Resurgence) just about steals the movie as the resourceful Erica.

Despite its initial promise, Greta doesn’t go anywhere new. In the end it’s a pretty conventional thriller done in a very conventional style.