A series of massive, crowd-pleasing chorus numbers are among the highlights of Grease: The Arena Experience. More than 500 enthusiastic youngsters join the 19-strong main cast and make a big impression. Harvest Rain Theatre Company is responsible for touring this production. They’re intent on introducing thousands of youngsters to the musical art form. 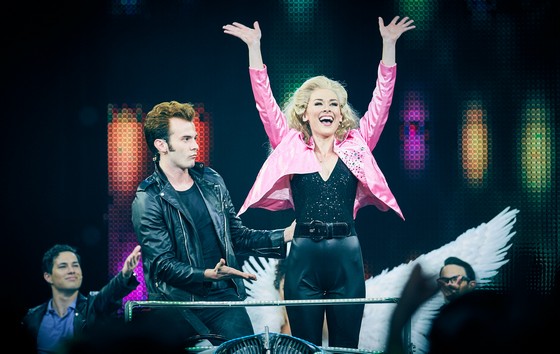 For those unfamiliar with the story, it is set in 1959 and follows 10 American working-class teenagers as they navigate the complexities of love. It focuses on the two leads. They meet and fall for one another over the holidays; but he’s all about appearances when they literally bump into one another again at school some time later. In that environment, Danny Zuko (Damon Wade) is seen as the cool guy and leader of the black leather jacketed T-Birds. They include Kenickie (Chris Geoghegan), Sonny (Michael Nunn), Doody (Barnaby Reiter) and Roger (Josh Whitten).

Sandy Olsson (Meghan O’Shea) is the Aussie newcomer to Rydell High who hangs out with the Pink Ladies. They’re led by “bad girl” Rizzo (Ruby Clark), with Frenchy (Stacey De Waard), Jan (Lauren McKenna) and Marty (Emily Monsma). For Danny and Sandy’s relationship to take off again, they have to navigate the outside influences and follow their hearts, but that won’t be easy.

O’Shea has a sweet and powerful voice and impresses as Sandy, Wade has the Danny swagger down pat, while Clark shows she is not one to be messed with as Rizzo. One of the show’s high points is Courtney Act belting out “Beauty School Dropout” in the second act. Courtney’s vocal range is astounding.

The production really kicks into gear after interval. Before that, I felt the staging, in particular, was strangely bland. Most of the action takes place on a catwalk-style stage with strip lighting surrounds. A large video screen dominates the entry to the catwalk, but the images projected onto it – frequently just clouds – are often dull. At least when vibrant colours and geometrical shapes are introduced, my interest intensified. 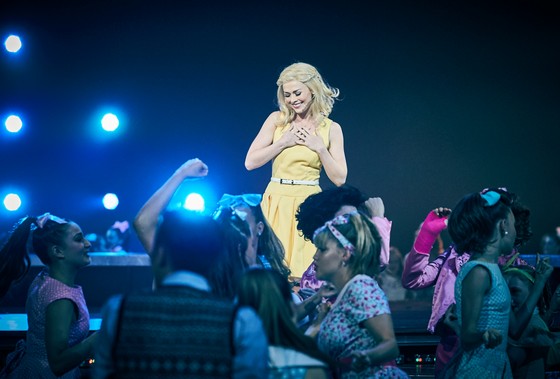 But still, given the distance many audience members are from the stage, surely it would have been better to mix that up with closep camera shots of the production’s stars “doing their thing”. The only prop of note is the old battered sports car that Danny drives for his date with Sandy. It looks good and when lit up it takes on the appearance of Joseph’s Technicolor Dreamcoat. That is a winner. Talking of lighting, the lighting design (by Trudy Dalgleish) often makes good use of the large, cavernous space.

A lot of work has gone into the choreography. Callum Mansfield serves as choreographer and director. Musically, Grease: The Arena Experience remains solid, joyful and fun (Dennett Hudson is the musical director).

After two more outings in Melbourne on 14 April, it moves to the Brisbane Entertainment Centre for two shows on 14 July; then onto AIS Arena in Canberra on 12 and 13 October; and Perth in the January 2019 school holidays.