Unbridled ambition gets a thorough workout in Gloria. This Pulitzer Prize-nominated drama from American playwright Branden Jacobs-Jenkins is one of four MTC Australian premieres this season.

Set in the offices of a prestigious Manhattan magazine, the play is a contemporary satire. The day-to-day drudgery is particularly wearing on a small group of editorial assistants. They go about their business without a great deal of enthusiasm, although Ani (Jane Harber) – who has been there for a year – appears to be quite pleasant. 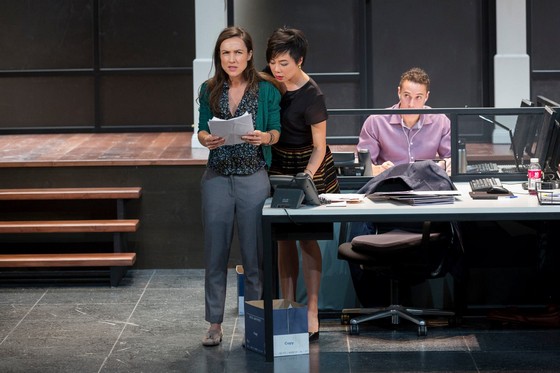 The longest serving member of the team is 29-year-old Dean (Jordan Fraser-Trumble). He’s a five-year veteran who secretly aspires to write a decent manuscript. Dean moans about the new breed of intern; who he claims has a born-to-rule mentality. He has no hesitation, therefore, in instructing their latest, the intelligent but compliant Miles (Callan Colley) – who is about to leave after having all but completed his six-week stint – to undertake menial tasks.

Dean is an unashamed networker, but that hasn’t gotten him far. This particular day he arrives late – and with a massive hangover. He was one of the few who attended the mortifying party of another work colleague, Gloria (Lisa McCune), the previous night. Gloria has been at the magazine for 15 years but there’s something strange about her. As late as Dean is, motor-mouth Kendra (Aileen Huynh) is even later. She doesn’t resile from paying out on everything and everyone. Work doesn’t appear to be on her agenda.

The vigorous interchanges between Dean, Ani and Kendra incur the ire of stressed fact-checker Lorin (Peter Paltos). He’s just been promoted and works down the hall. Lorin implores the editorial assistants to pipe down.

If you are thinking that this is pretty thin thus far, you’d be right. The first act felt dull; but then just before interval something happened to change everything. The shock in the audience was palpable.

I was far more involved throughout the second and third acts after the break. The action moved forward in time from what occurred at the end of Act I. The second act is set in a coffee shop at Christmas and the third in the offices of a television station. Act II, in particular, really sizzles and features an incendiary exchange between Dean and Kendra, and a superbly realised, heart-felt monologue from Dean’s former boss, Nan (Lisa McCune’s second character). All the actors, apart from Peter Paltos, play two or three roles. 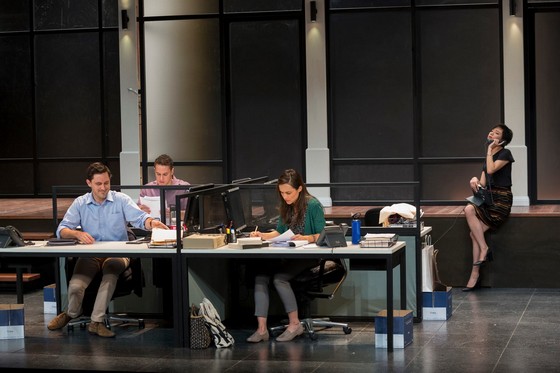 The set design and changeovers between acts are mightily impressive. When the curtain rises after interval, you can’t but help be gob smacked by the quantum shift. Christina Smith is the set and costume designer.

After building up very effectively during the second act and showing promise in the third, I felt let down by the ending. I thought the theme on journalistic ambition could have gone further. Sure, Gloria makes a point about the cut and thrust of our media-saturated world; but given the heights it reaches in the middle stages the ending felt like a bit of a cop out.

Directed by Lee Lewis, Gloria is on at Southbank Theatre, The Sumner until 21 July 2018.

* I saw the first preview performance of the production.