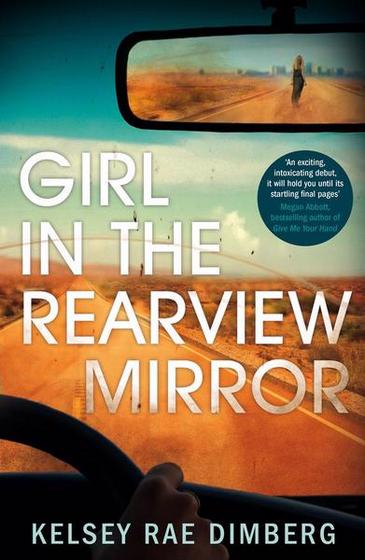 Girl in the Rearview Mirror is a very modern American novel in all the best ways and invites its readers into the sparkling arena of the rich that is rarely experienced by most of us.  Think paid staff, exhibition openers, political campaigns and designer dresses and this is the privileged world of the Martins, Arizona’s power couple and family of influence.

Finn Hunt is a young woman happy to take all opportunities that come her way, whilst never forgetting that an easy smile and confident manner is her best entry into places that her modest bank balance and lack of family credentials would otherwise not admit. Finn has her foot in the door of top tier Arizona society, working as the nanny for Philip Martin, the charismatic son of an equally charismatic US Senator who is up for re-election.  Finn’s charge, the energetic Amabel, is the child of two very busy parents who have a lot on their minds and very little time for the practicalities of raising a four year old.  Fine by Finn, who is a work in progress.  Finn was once Natalie, a teenager shunned by her community for what they felt was her part in the death of one of the town’s most popular teens in a boating accident.   In Phoenix, no one knows Finn’s backstory, and she is able to close a door on the person she once was to embrace all that the Martin’s lavish lifestyle may extend to her.

Wealth attracts the grifters and the manipulators, and it is into the web of these that Finn is ensnared.  An odd young woman, attractive but not in the class of the Martins, is following the family around, claiming to have knowledge of a scandal that will bring them all to their knees.  In her efforts to protect the Martins and thus herself, Finn finds herself caught between a pair of schemers who have, like her, seized on an opportunity.  With secrets on both sides of the divide, Finn has to make some careful decisions as it becomes clear that there are plenty of people around with good reasons to keep the secrets of the rich and powerful.

Girl in the Rearview Mirror is a very summer novel with an interesting protagonist who would ordinarily be sidelined as a bit player. The help see all, and Finn has plenty of opportunities to observe and listen, fascinated and drawn as she is by the special glamour that the very rich and powerful possess.  It’s evident throughout out that Finn aka Natalie is going to be unmasked, and this low level dread simmers in the background as Finn’s interference into the lives of her employers begins to change the outcomes of everybody involved.  Some readers may loathe that pre-knowledge and others might be curious as to how this unmasking will occur.

Finn is a chronicler of her own days and that of the Martins. Sometimes she is motivated by curiosity and at other times it seems Finn moves forward only out of sheer boredom.  This curious lassitude adds to the languid, heat infused narrative of Girl in the Rearview Mirror.

The notion of a person not being able to run away from their own past or true self is strong in this novel, and Finn sees that inevitability coming up like a crash on the horizon.