In 2014’s The Fault in Our Stars, two teenage cancer patients fell in love. Five Feet Apart focuses on the challenges faced by two besotted teens with cystic fibrosis. They’re forbidden from touching one another … and definitely can’t kiss. 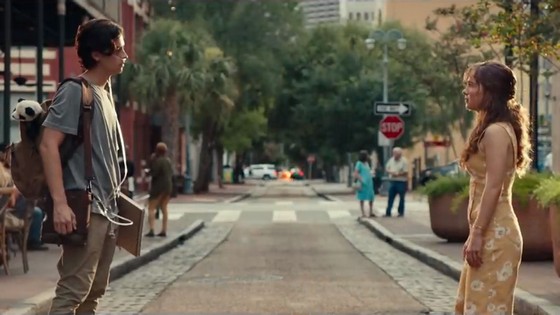 Haley Lu Richardson (The Edge of Seventeen) and Cole Sprouse (Riverdale) bring to life Stella and Will, whose romance defies the odds. This is an “opposites attract” story. Stella is a vibrant vlogging star who likes to be the master of her universe. Will is everything she meticulously avoids: a disorderly rebel and rule-breaker who doesn’t seem to take even his own future seriously. Stella is everything Will is sceptical of: a high achiever with a wide-eyed enthusiasm and unbreakable spirit, despite her hard knocks.

When they first meet, they’re more than happy to keep to their doctor’s strict decree of remaining six feet apart at all times to avoid Will giving Stella a dangerous bacteria. But Stella is about to give Will a reason to fight; and Will is about to give Stella a jolt of spontaneous freedom. Both will upend the rules as they dare to steal back the space that divides them. (The reason the title is Five Feet Apart and not six is explained in the movie.)

The casting of the two leads is a winner, with Haley Lu Richardson moving mountains with her infectious smile and Cole Sprouse the picture of smouldering intensity. Moises Arias gives a good account of himself as the cheeky Poe, Stella’s best friend. So too Kimberly Hebert Gregory as the authoritarian nurse Barb, who only wants the best outcome for her patients.

As expected, the movie includes plenty of challenging situations mixed with a series of high points. These teenagers lives are anything but normal and yet it’s normal they crave. The screenwriters have done a good job balancing the dour with the Hollywood treatment love story. The plotting has something in common with a Nicholas Sparks’ book.

I feel that a real situation like this would be a whole lot grimmer, but this is a movie and Five Feet Apart is sure to draw in its target audience.