Scheming and gossip abound in the lavish big-screen version of Downton Abbey, where opulence is the byword.

First an admission, I only heard wonderful things about the TV series but I haven’t seen one episode. As a result, it took me some time to work out who was who in the zoo, namely who the characters were and where they fitted in to the big picture. Once I did, I sat back and revelled in the pomp and ceremony of the closeted folk that populated the movie. 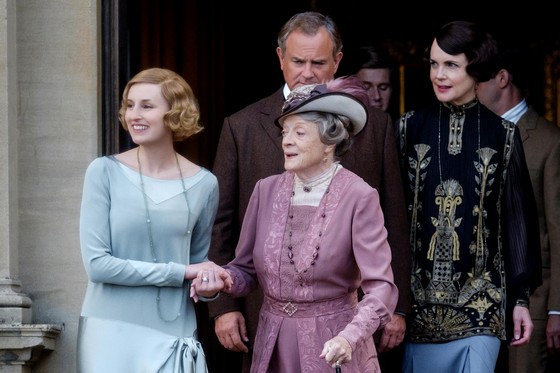 The highly successful TV show, created by Julian Fellowes, who has also written this script, ran for six seasons from 2010 to 2015. Set in the fictional country estate of Downton Abbey between 1912 and 1926, it focused on the lives of the aristocratic Crawley family and their domestic servants.

The film picks up the story in 1927. We return to the Great House with the most illustrious guests the Crawley family could ever hope to entertain, namely their Majesties King George V (Simon Jones) and Queen Mary (Geraldine James). With a dazzling parade and lavish dinner to orchestrate, Mary (Michelle Dockery), now firmly at the reins of the estate, faces the greatest challenge to her tenure as head of Downton. The calibre of the visitors causes quite a rumpus below stairs too and cracks begin to form in the usually well-oiled machine.

Mary pleads with the retired Charles Carson (Jim Carter) to return to the house, just this once, to oversee this most significant event but not everything goes to plan. The loyal Downton staff must pull out all the stops in order to ensure success and that the place they are proud to call home is presented in its greatest light. The King and Queen bring with them a lady-in-waiting whose own story will prove explosive to the Crawleys and the future of Downton.

I particularly enjoyed the skulduggery and scandal. Undoubtedly the best lines in the piece were saved for the incomparable Maggie Smith as the Dowager Countess of Grantham, Violet Crawley, who delivered them with aplomb, as is her want.

Downton Abbey has drama, subterfuge, romance and humour. As is only to be expected, the film looks spectacular. The settings, sets and costumes are beautiful. The attention to detail is most admirable. Towards the end, a lot happens in a short time as the filmmakers bring all subplots to a conclusion with a series of rapid-fire scenes. Everything is perhaps wrapped up a little too nicely and conveniently. I wouldn’t have minded a few loose threads to allow for a sequel.

What that says is that I enjoyed the Downton Abbey experience regardless of the clean ending.