Not being able to conceive when one is desperate to start a family can cause major rifts in a marriage. Infertility affects about one in six Australian couples of reproductive age. That is the starting point for a world premiere work by Australian playwright Ron Elisha, which originated from a feature article in The Australian Weekend Magazine on 14th October, 2017.

But please don’t think for a moment that Donating Felix is a dry, scientific piece. Far from it. Rather, it is drama filled, with a surfeit of comedic layers, as the four protagonists – two couples – are at times at loggerheads within their respective marriages and most certainly with each other.

38-year-old Leah (Eliza Mategnu) is fixated on becoming pregnant, but after almost five years of trying with her husband, Brad (Stephen Mahy), it hasn’t happened. IVF hasn’t helped either. Affluent property developer Brad, 40, isn’t too fussed, which bothers Leah all the more.

Still, at the start of the play, the pair is getting ready to meet a woman and her husband who are looking to find the perfect donor for her frozen embryo. It has been on ice for almost a decade and time is fast running out before the lab will dispense with it altogether.

Jane (Marisa Warrington) and Ross (Anthony Scundi) already have a daughter, aged eight. But Jane has had a hysterectomy and it took her some time to decide what she wanted to do with her left-over embryo. For a while she considered donating it to science, but then quashed that idea. Since she finally decided to advertise for a donor she has met a number of duds.

For Jane, this is deeply personal. She even knows the sex of the embryo, but hasn’t told her husband. More than that, she has named “him” Felix. Like, Brad, Ross – who is on his second marriage – is over all the drama. Not only is Jane intent on asking Leah some hard questions when the couples come together, but Jane wants to play a pivotal role in “her” baby’s upbringing.

Leah is understandably concerned. The red flags are up in more ways the one, but the deal gets done, only for things to quickly unravel thereafter.

With a running time of an hour and a quarter without interval, events take place over a period of two years and three months. Facing some highs and many lows, Donating Felix has pathos – along with smart one liners – and is affecting. It has shifts in mood aplenty, with no shortage of misbehaviour.

I found myself waiting for the inevitable twists to occur. In other words, I felt it took some time to get going and to get me really invested. Once I was, however, I was riding every bump (no pun intended). Overall, the writing displays wit and verve – the whole idea being to push the buttons of the players and to get a rise out of them, which happens regularly. 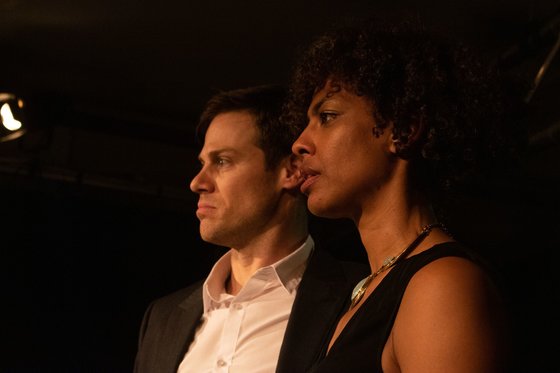 I particularly appreciated the performances of the secondary players – in this case the men. Mategnu does well playing strong but vulnerable, while Warrington delivers vitriol with aplomb. The final cast member is Andy Berry Brown, who fills three ancillary roles.

The stage – with minimal staging – is in the shape of a shortened runway, with the audience on either side, so each patron is close to the action. Directed by Suzanne Heywood, Donating Felix – by Q44 Theatre – is playing at Abbotsford Convent until 29th March, 2020.