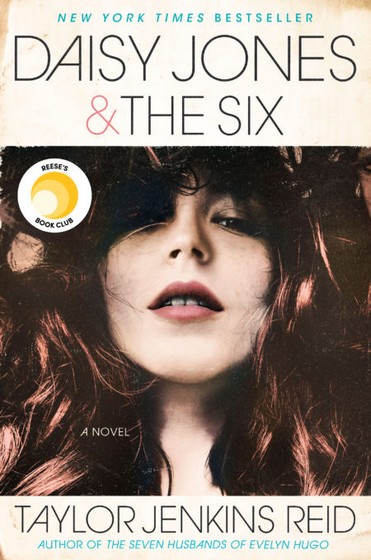 Everyone knows Daisy Jones & The Six, but nobody knows the reason behind their split at the absolute height of their popularity . . . until now.

This firecracker of a novel details the sparkling but short life of a very successful 70’s band who once flew so very close to the heat of the sun.  The reader will not need to have been part of the 70’s musical era or to have observed/experienced any such success to be able to identify with the events of this book – the differing ideologies, the personality clashes, the accelerated and destructive lifestyles etc.  You’ll find those in any artistic collective, right?  But you’ll get a lot more take home from your reading of Daisy Jones and the Six if you were ever there yourself.

Daisy is a girl coming of age in L.A. in the late sixties, sneaking into clubs on the Sunset Strip, sleeping with rock stars, and dreaming of singing at the Whisky a Go-Go. The sex and drugs are thrilling, but it’s the rock and roll she loves most. By the time she’s twenty, her voice is getting noticed, and she has the kind of heedless beauty that makes people do crazy things.

Another band getting noticed is The Six, led by the brooding Billy Dunne.

Daisy and Billy cross paths when a producer realizes the key to supercharged success is to put the two together. What happens next will become the stuff of legend.

This account of the rapid ascent of Daisy Jones and the Six is chronicled by an unnamed writer for most of the book.  We get the different perspectives of each band member, the managers, the mixers, the family. All relate their own stylized memories of what happened all those years ago when their careers were bright and shiny, and most were in firm possession of a doomed belief that the wild ride would never end.  This is lush work, quite often funny and as a bonus contains some gorgeous lyrics which we only need to insert into melodies not yet written for them.

As with so many bands back in the day and in the present day even, the engine room of bassists and drummers are present, and we do hear their viewpoints but they are never in the limelight in the same way as the singers.  What author Taylor Jenkins Read does so well is to illustrate that behind the focal point of singer/songwriters Billy and Daisy there were so many talented others, all working towards the same goal, though with varying degrees of investment.

There’s so much musical wing clipping going on in this book, cleverly realised, that it is VERY difficult to believe all of it did not actually happen.  Once you wrap your head around this, you may think you have figured out who the real life inspirations were for the writing of this book.  Anyone out there who has ever been through that rite of passage of being in a dodgy high school rock band, or has pub gigged for something other than a burger, will find absolute joy in recognizing bits of themselves in their reading of this book.  Daisy Jones and the Six is a homage to musicians and song writers everywhere.   Even more so, of the supporters and enablers who make it all possible, for little reward.  You’ve all been heard, and this is your book.

Did you think you’d never read a rock biography, let alone one about a band that never was?  This book will be outside of your reading comfort zone for sure but it’s a day or two out of your life that will be so well spent.

It will come as no surprise to anyone that Daisy Jones & The Six is to be adapted into a limited television series by Amazon Studios.