More twisted weirdness from New Zealand filmmaker Ant Timpson, best known for his work as a producer on gory horror films like the 2012 horror anthology The ABCs of Death. Timpson makes his feature directorial debut with this irreverent, nasty and darkly comic thriller about a young man who tries to reconnect with his estranged father after a thirty-year absence. 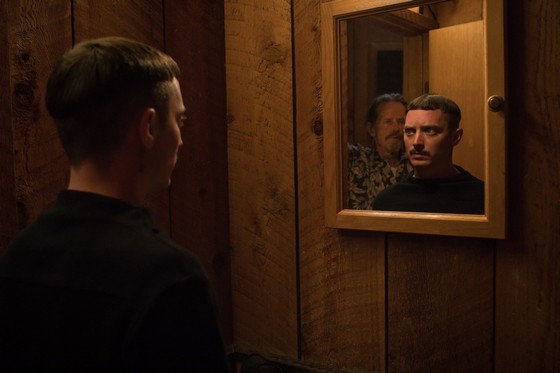 Norval Greenwood (Elijah Wood), a hipster musician with a terrible haircut, arrives at the remote lakeside house of his estranged father following a cryptic letter asking him to come and visit. On arrival at the uniquely designed house (which looks like a UFO from a 60s sci-fi movie), Norval is subjected to a torrent of verbal abuse from his father. Soon he is quickly thrust into a dangerous situation as a group of vicious men have come looking for revenge against his father.

Co-written with Toby Harvard (The Greasy Strangler), the film constantly subverts expectations. Timpson delivers (with relish) some gore and gonzo sleaze. He also ramps up the claustrophobic tension. Great production design from Zosia Mackenzie makes the house almost a character in its own right. The film has been atmospherically shot by cinematographer Daniel Katz (I Am Legend), who works in close-up to heighten the effect.

Wood, best known for playing Frodo in the Lord of the Rings trilogy, is perfectly cast here as Norval. He again taps into that creepy side of his screen persona he explored so effectively in 2012’s Maniac remake. Here he adds to his gallery of oddball characters and displays an awkwardness that’s uncomfortable but somehow endearing. The supporting cast includes Stephen McHattie in full on weirdness mode, and Martin Donovan.

Come to Daddy is available via video-on-demand from Umbrella Entertainment from 1 April 2020. It will also be available via iTunes and Google Play later in April.