Amy Ingram has a talent for portraying insecure or downtrodden females and she uses that talent well in this rib-tickling little two-hander as Ashley. She was joined by the equally talented Thomas Larkin as the same-name, same problem character. Between them kept the audience laughing, quietly empathising or groaning at ineptitude.

The action was played out on an ingenious set designed by Chloe Greaves. It was a simple square that was easily adapted to suit several different scenes. I liked her costuming too and the show was well lit by Jason Glenwright. 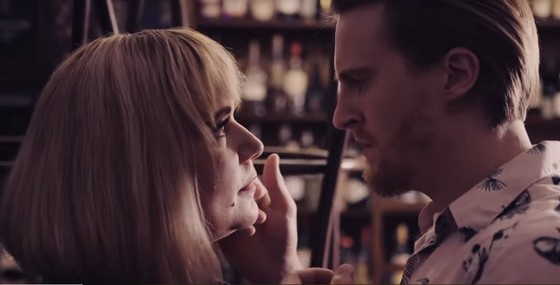 Ashley is flustered as, in the noisiest of bars, she awaits the arrival of her Tinder date, Richard, also played by Thomas Larkin. Richard turns up and Ashley flees leaving behind one of her wedge heeled sandals. This was collected not by a prince, or even Richard, but by the awkward, beanie-capped Ash, full name Ashley, coincidence or not?

So the introduction is made and what follows a chuckle a minute but often painful and awkward romance. Superficial conversation about movies and Asian food covered their social ineptness and personal insecurities and a stroll in the park at night conveyed the so often missing joy of simplicity. And those damn shoes kept coming on and off and time seemed to be a matter of some importance for Ash. Then came the question: “your place or mine?” It turned out to be Ashley’s fairly uncomfortable apartment that contained many different tea blends, Milo but little in the alcohol range.

Prominent was the electric clock. There was obvious lust in Ashley’s eyes and Ash obviously had been rejected many times so was terrified of making a move. The halting, uncertain advances, bold statements and instant retractions of the duo beautifully created the dating world of today; of short term romance and demand for instant gratification not available for so many.

The two actors worked smoothly together and slowly brought the two characters to a semblance of romance. Love was never mentioned, nor was sex, but they were both searching. They were clever character interpretations from director Daniel Evans. Who is Cinderella and who is the Prince? Or are they both thrown into the blender and then split between the two unlikely would-be lovers?

We had 75 minutes work this out and it was an intriguing journey of twist and turns. The one thing we were certain of was the fact that something was going to happen at midnight – and it did!

Myths Made Here’s production of Cinderella is on at the Cremorne Theatre, QPAC, Brisbane until 5 May 2019. Bookings: www.qpac.com.au or phone 136 346.