Energetic, colourful and captivating, this is up there with the very best productions of Andrew Lloyd Webber’s CATS and I have had the good fortune to see several of them. A massive cast of 87 (plus an alternative 13 “kitten” chorus) and a 16-piece orchestra breathe new life into a show that was first staged in London nearly four decades ago. It is based upon a 1939 poetry collection titled Old Possum’s Book of Practical Cats by TS Eliot.

It has ditched the traditional rubbish dump setting in favour of an abandoned music hall sometime after the demise of the Jazz Age (which was the 1920s). It remains the story of a clowder of cats called the Jellicles and the night the elder Old Deuteronomy makes what is known as the Jellicle choice. In short, he decides which feline will ascend to the Heaviside Layer and be born anew. Before he does so, we are introduced to many of the characters – proud, arrogant, strong, downtrodden and magical – that constitute the collective.

The voices are strong and lyrical, with solos and duets giving the leads the opportunity to shine and that they most certainly do. As ostracised one-time glamour cat Grizabella, Suzannah Bourke does a superb job of realising the bittersweet ballad Memory. James Keam brings heartfelt personality to Rum Tum Tugger. Tim Bland impresses as Gus, The Theatre Cat and in realising Growltiger’s last stand. Matthew Casamento as Mungojerrie and Adeline Hunter as Rumpleteazer have great chemistry. It is hard not to join in the hissing whenever Nathan Derix-Brown takes to the stage as the conniving Macavity, the villain of the piece. And there are many others besides that impress in a cavalcade of talent. I am also delighted to be able to say that a wall of sound greets you with the chorus numbers, which are superb and inspired. 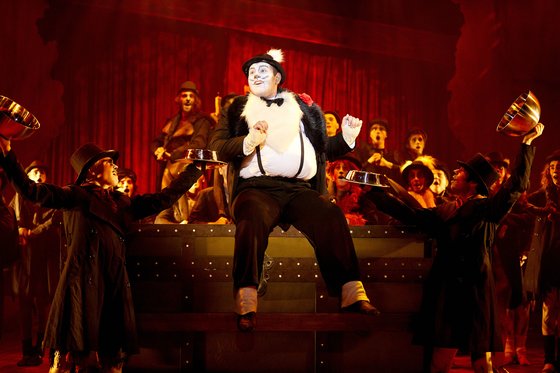 Jacqui Green has done a marvellous job with the choreography (it is not easy to herd cats!). Quite frankly, ensuring nearly a hundred people on stage don’t bump into each other is a task in and of itself, let alone what she does manage to do with them. Massive plaudits to Robert Coates for his direction. He, together with his production team, have created a rolled gold winner.

There is a great deal of love in the room for what Young Australian Broadway Chorus has achieved with their production of CATS, just as there should be. It is playing at National Theatre until 25th January, 2020.