Supernatural hazing. Is there such a thing? I think not, but there is according to this festive season horror – a remake of the 1974 and 2006 killer chiller features. 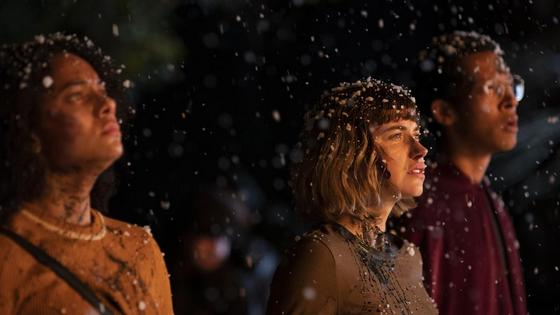 Hawthorne College is quieting down for the holidays. But as Riley Stone (Imogen Poots – Green Room) and her sorority sisters prepare to deck the halls with a series of seasonal parties, a black-masked stalker begins killing these young women one by one. The stalker’s method of prey is to send text messages to his pending victims and scare the bejesus out of them before striking.

The question is, is he acting alone?

Stone chances upon a strange ritual being conducted by her male counterparts, in front of a bust of the college’s founder, who dates back nearly 200 years. He had no regard for women and considered them as subservient to men. Now an esteemed classics instructor, Professor Gelson (Cary Elwes), seems to be maintaining Hawthorne’s legacy. Stone was understandably antsy long before witnessing the lads’ antics. The reason: she was raped by the college president three years ago. The problem is that nobody in authority believed her and the guy involved was able to continue to roam free.

As the body count mounts, Stone and her girls start to question whether they can trust any man. That includes Stone’s new crush Landon (Caleb Eberhardt) and the beta-male boyfriend of one of her friends.

Black Christmas circa 2019 may have a preposterous storyline, but it still serves up a few scares. Imogen Poots is a strong lead, walking the tightrope between traumatised and strong. For any film of this sort to have teeth there need to be casualties and that there are. Using one of the tropes of the genre, masks are used liberally … aiding to the mystery of just who is pulling the strings. And there are twists in plot development as the film nears the end.

Young women cat fighting adds to the drama. Aimed at millennials – young women in particular – Black Christmas is hardly a world beater, although it has a few teeth. This is a script borne of the #MeToo generation. Nearly all the men that appear in the movie are cast as exploitative misogynists.

Co-written by Sophia Takal and April Wolfe, and directed by the former, Black Christmas, is rated M.