I’m really not ashamed to admit that I’m always looking forward to watch a live-action rendition of a Disney cartoon. We’ve seen a few of those already passing by. One more succesful than the other. Or better, one I liked more than the other. Maleficent, The BFG and especially The Jungle Book were, in my view, gorgeous adaptations. I was less enthusiastic about Alice in Wonderland. 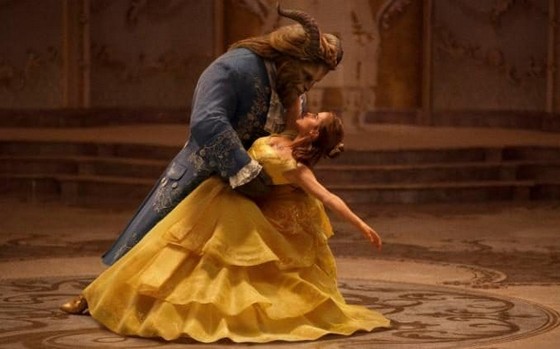 Let me start again with the best parts. This time it’s not the main roles that deserve the most praise. No, the supporting roles do. They were simply beautiful. Humorous, lively and fascinating to watch. First of all, the enchanted household objects from the castle. Cogsworth (Ian McKellen), Lumière (Ewan McGregor), Mrs. Pott (Emma Thompson), Chip (Nathan Mack), Madame Wardrobe (Audra McDonald) and Maestro Cadenza (Stanley Tucci) are a grab-bag of props and despite the fact that they are graphic creations, they really look lifelike. Not only the design is fairy-like. The voices of the actors also provide additional magic.

And then you have the odd couple Gaston (Luke Evans) and Lefou (Josh Gad) who can easily compete with the legendary duo Laurel and Hardy. Luke Evans was fantastic as the narcistic Gaston who uses every moment to praise himself and who’s always stroking his own ego. An egoist who is not only strong, handsome and feels superior, but also who thinks it’s self-evident that everybody dances to his tune. And of course he assumes Belle will marry him blindly. Lefou on the other hand is the clumsy, tractable servant who constantly runs after Gaston and agrees with him all the time (only in the end there’s some doubt). Probably the only character people made a lot of fuss about in advance. And all that because of his so-called gayish behavior. Well, there’ll always be nitpickers. Terribly exaggerated in my opinion. Not even worth mentioning.

In general the story is the same as the one told in the 1991 cartoon. There are a few adjustments and additions. I’m not such an expert when it comes to this fairy tale, but I really can’t remember there was an explanation about the death of Belle’s mother. And in fact, I wonder if this was a valuable addition anyway. On the other hand, much attention has been paid to the design. The palace of the beast looks phenomenal. A giant building full of stately ornaments and impressive rooms and halls where Rococo is blended with other European styles. The appearance reminded me of my visit to Neuschwanstein Castle when I was young. The styling applied in this contemporary version of a classic Disney looks pretty okay you can say.

So, which were the parts I wasn’t happy about? The first one has to do with personal preferences and shouldn’t really be seen as something negative. I thoroughly hate musicals. Voila, I’ve outed myself. As soon as the first song has finished (usually quite soon at the beginning of the film), I have trouble concentrating on the actual story itself. I find myself anxiously waiting for the next damn song to begin (And every void, insignificant event is enough to get everybody singing in a musical) .

Perhaps the plethora of musicals I’ve watched in the weekend during my youth, is the cause of this phobia. There wasn’t Saturday without a Busby Berkeley-like musical being broadcast again. Now I have to admit that the song “Be Our Guest” was put together well. A thrilling spectacle. But my hate for musicals will always stay. What disappointed me the most was the graphic design of the beast (Dan Stevens). Especially the famous scene with Belle (Emma Watson) in her impressive, yellow dress dancing through a giant ballroom in the arms of the beast, wasn’t so great. Here you could clearly see the beast was a computer generated character.

Beauty and the Beast is magical, detailed and fascinating. A must see for anyone who’s a major fan of Disney films. Even Emma Watson was brilliant in my opinion and the appropriate person to play the lovely, cute Belle. And if she indeed sang all these songs herself (even if sophisticated sound techniques were used to make it sound even better), then she’s also a talented singer. Despite some personal remarks, this is also a successful recasting of the classic version. Only the magic of The Jungle Book overwhelmed me more when I saw it. What the heck, on to the next Disney movie as soon as possible please!

Disney’s Beauty and the Beast (2017 version) is now available on DVD, Blu-ray and via on-demand services.