Lady Gaga and Brad Cooper mesmerise in A Star is Born. Their tour de force performances bring a decidedly 21st century take to the highs and lows of fame. The picture is based on screenplays for the 1954 film of the same name featuring Judy Garland and James Mason and the 1976 version starring Barbra Streisand and Kris Kristofferson. 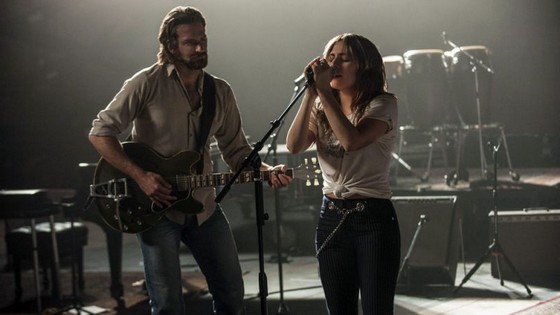 When this version opens, rock star Jackson Maine (Cooper) is about to go on stage. But not without first swallowing a few pills, easing them down with a swig of alcohol. It’s a long-time ritual for him; but his connection to the crowd and his performance are undeniably of the moment. He’s a star.

After the show, Jack asks to be dropped off at a random bar. It’s drag queens night. The one exception is struggling artist Ally (Lady Gaga), who knocks it out of the park with her performance of “La Vie En Rose”. Jack is immediately besotted, struck by her and by the power of her voice. Although flustered, Ally allows Jack to take her under his wing in more ways than one and the pair begin an intense relationship. She steps into the limelight and immediately wins over the crowd. But as her star begins to rise, his is on a downward spiral as his addictions begin to get the better of him.

Maine’s older brother, Bobby (Sam Elliott), has seen him in the best and worst times. Bobby has been Jack’s surrogate father, manager, counsellor and possibly even drinking buddy. A talent in his own right at one time, he gave up any aspirations he held for himself to usher his more gifted little brother into stardom. But the sacrifice has left a bitter taste for both men that even brotherly love can’t always completely overcome.

It’s hard to believe this is Cooper’s directorial debut, the direction is so accomplished. Incidentally, he also co-wrote the script. It’s also Gaga’s first feature film starring role. The whole thing feels raw and real. The chemistry between Cooper and Gaga is palpable. The acting feels natural – it appears to come from the soul.

The music is great. The soundtrack is masterful. The secondary players make their presence felt.

Undoubtedly one of the year’s best offerings, A Star is Born establishes Lady Gaga as a bona fide star of the screen, not just the concert stage. I loved every moment of it.