The intensely brutal prison drama A Prayer Before Dawn is like Kickboxer meets Midnight Express. This unflinching, hard-hitting and gritty and harrowing true story is set inside Thailand’s notorious Bang Kwang Central Prison, better known as the infamous Bangkok Hilton. Like Midnight Express, A Prayer Before Dawn is based on a real-life story. In this case, it’s the 2014 memoir by expat Brit Billy Moore (played by Joe Cole). 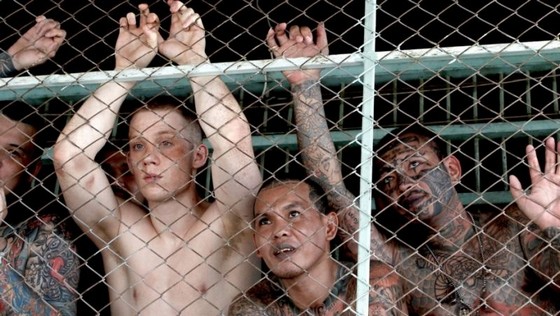 Moore ekes out a living on Bangkok’s mean streets as a street fighter and small-time drug dealer, until he is arrested and imprisoned in one of Thailand’s toughest prisons. Confined to a crowded cell which he shares with heavily tattooed thugs, and living in squalid conditions, Billy often fears for his own safety. Fights, gang rape, drugs and corruption are rife inside the prison. Moore survives his ordeal when he joins the prison boxing team and becomes a champion Muay Thai boxer. He also manages to maintain some vestiges of his humanity through a mutual attraction to ladyboy inmate named Fame (Pornchanok Mabklnag).

Writers Jonathan Hirschbein (Red Country) and Nick Saltrese (a TV veteran) have adapted Moore’s book for the screen. A Prayer Before Dawn is the second narrative feature from French director Jean-Stephane Sauvaire. He doesn’t pull his punches with this gritty drama. Sauvaire heightens the sense of danger and tension. Quite often the dialogue is not subtitled, which allows the audience to feel as confused and uneasy as Billy.

The film serves up a brutal ballet of fights choreographed by David Ismalone. Cinematographer David Ungaro uses hand-held cameras to get close to the action and give the material a claustrophobic feel. He infuses the film with a suitably dingy aesthetic.

A ferociously committed and physical performance from Cole drives A Prayer Before Dawn. He’s put through the wringer. His gutsy performance captures Moore’s grit and determination to survive. And he brings plenty of swagger to his role. The real-life Billy Moore contributes a brief cameo here as Billy’s father.

A Prayer Before Dawn avoids many of the usual clichés of the prison drama. But this is tough going and many will find it hard to sit through.