Playwright Eddie Perfect (The Beast) has crafted a wickedly clever musical satire with Vivid White, which focuses on the overheated property market.

Liz (Verity Hunt-Ballard) and Ben (Brent Hill) have been friends with popular performer Evan (Ben Mingay) for years. Evan is married to producer Cynthia (Christina O’Neill). Back in 2005 Ben and Evan won a major prize at the Edinburgh Fringe Festival for their satirical act. Ben has remained wedded to satire, although forging a prosperous career has been difficult. Evan meanwhile has branched out most successfully.

Neither of the boys would ever let anything get in the way of their mateship. That is until they and their respective partners set their sights on buying the same house. That’s different! Forget friendship, forget respect, forget human decency: home ownership is the God-given right of every Australian. Not even the imminent collapse of civilisation itself could stop their determination to buy the perfect abode, especially as Liz’s “inner voice” told her it was hers. 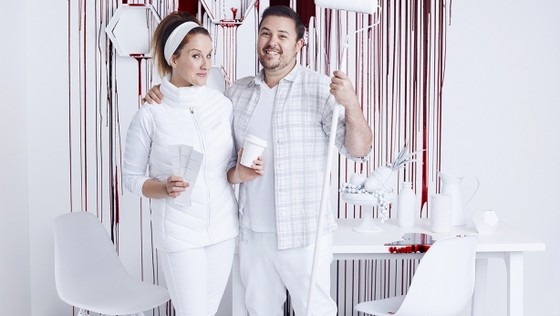 Vivid White is Theatre of the Absurd, which will delight some, and infuriate others. It’s a bold undertaking for MTC; a world premiere work two years in the making. Technically and creatively it has pushed the company. I, for one, applaud its initiative. The future of theatre is not with the over-50s, but with millennials and with what appeals to them. I believe this work has that in spades, while it will still attract others who have an open mind.

After a truncated musical intro, Vivid White kicks into gear with a hilarious voice-over and then a full song with liberal use of the “F” word. The subsequent verbiage is punctuated by a succession of pointed ditties (musical direction and orchestration is by James Simpson). The cast is nothing if not versatile, filling multiple roles – singers, musicians and actors. Among the instruments in play are keyboards, guitars, drums, flute and tambourine, to name but a few.

The principals are driven (and terrorised) by a malevolent force, known as Güüs, that pits competing prospective homeowners against one another on a destructive path. The level of absurdity kicks up a gear in the second act, as all hell breaks loose. Australians’ obsession with owning their own home has, for so many, become an ever more-distant dream. It has indeed become a nightmare. So I commend Perfect’s choice of subject and his twisted take on it.

Vivid White is outrageous and surprising. One of the highlights is the appearance of a life-sized rescue greyhound puppet with “handler”. There’s a lot to like about Dean Bryant’s execution of the material. The piece moves along at pace. The sets are varied, readily recognisable and relatable (Owen Phillips is responsible).

Hats off to the talented headliners, who make Perfect’s words sing (pun fully intended). I have already referenced four. Virginia Gay’s turn as a bidding real estate provocateur is a beauty. In fact, all she does here is gold. I also appreciated Gillian Cosgriff’s character range, with Keegan Joyce completing the core. The leads are supported by six second-year students from the Victorian College of the Arts, drawn from a pool of 19 who will rotate in their positions throughout the season. This is sure to give them invaluable experience in front of a paying crowd.

Vivid White is exciting and edgy theatre – a very positive way to see out the 2017 MTC season. It’s playing at Southbank Theatre, The Sumner, until 23 December 2017.

* I saw the first preview performance of the play.