The contrast between the haves and have-nots is starkly evident in The Viceroy’s House, a historical drama based on fact.

When the English wanted out of India, the country was deeply divided along religious and cultural lines. Indians were literally killing each other and the man tasked with orchestrating a smooth handover was the highly regarded Louis Mountbatten – the great grandson of Queen Victoria. But notwithstanding his honourable intentions, he was blindsided. 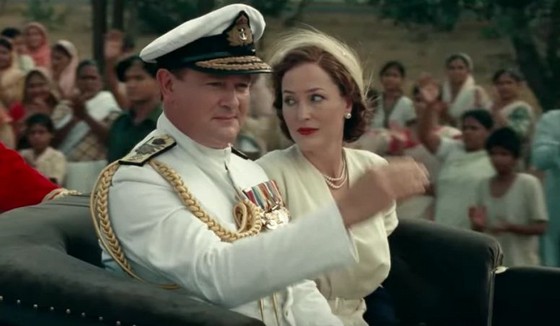 The relationships of two couples form the backbone of the story. Mountbatten (Hugh Bonneville) and his wife (Gillian Anderson) – who brought with her a strong and respectful philosophy when it came to the role native Indians needed to play in the Viceroy’s House – had a massive task on their hands. Their family’s employees – Jeet (a Hindu personal valet to Mountbatten) and Aalia (a Muslim translator for Mountbatten’s daughter, Pamela) – weren’t free to pursue a personal relationship because Aalia was already promised to another man.

The 1947 Partition of India has always been part of director and co-writer Gurinder Chadha’s life. She wrote the script with her husband, Paul Mayeda Berges and Moira Buffini (Jane Eyre). She was raised in West London and born in Nairobi 13 years after the controversial “Mountbatten Plan” struck a jagged line through the north-west of the freshly independent Union of India to create the Dominion of Pakistan.

The British-Punjabi filmmaker describes herself as someone who grew up “in the shadow of Partition”. Her ancestors were ensconced in the foothills of the Himalayas, now on the Pakistani side of the border. Her grandparents lived through the tumultuous events that saw sectarian violence between India’s minority population of Muslims (many of whom craved their own homeland) and the Hindu and Sikh majority. It brought about the greatest refugee crisis the world had seen. An estimated 14 million people were displaced during Partition and up to a million died.

While an independent India and Pakistan were to be celebrated, the process by which this was achieved caused terrible suffering for so many Hindus, Muslims and Sikhs.

As a writer-director, Chadha has repeatedly translated her personal experience as a Punjabi-British woman into uplifting, crowd-pleasing movies, such as Bend It Like Beckham. This tragic aspect of her cultural and family background was something she’d always shied away from as a film-maker because, she says, “it was too dark, too traumatic.” Then, in 2005, she took part in the BBC’s family-tree-exploring program Who Do You Think You Are? that took her back to her ancestral homeland. It was then Chadha realised that she had to confront her fears and make her movie about Partition.

“I didn’t just want to explore why Partition happened and focus on the political wrangles between public figures, I also wanted to make sure the audience understood the impact of Partition on ordinary people.” Chadha conceived the idea of setting her story entirely in the Viceroy’s House, the British Raj’s seat of government in Delhi, to create an “Upstairs, Downstairs vision of Partition”.

Upstairs it would focus upon the negotiations between Lord Mountbatten, the last Viceroy of India, and the country’s political leaders Nehru, Gandhi and Jinnah. Downstairs, it would interweave the stories of the every man – their hopes and fears in relation to how these negotiations would impact their lives and the lives of their loved ones. “In the film, Viceroy’s House is almost a character in its own right”, says Chadha.  “It was designed by Lutyens and took 17 years to build. Its imposing architecture was an expression of Imperial power, intended to intimidate.

“I’m sure that when it was completed in 1929, no one could have imagined that in less than 20 years it would become the home of the first President of India (and it remains the largest residence of any head of state anywhere in the world!).” The result is a film in the tradition of David Lean’s A Passage to India (1984) and Richard Attenborough’s Gandhi (1982). The opulence of the Viceroy’s House is a sight for sore eyes – breathtaking, in fact – and quite a contrast to the situation on the streets, where survival was a challenge.

I was particularly taken by Bonneville’s performance as Mountbatten. He brings civility and intellect to the role, while Anderson – as his wife – adopts a very proper English accent.

It was hard not to be moved by the dreadful circumstances faced by the country at that time. Black and white recreations and actual footage at the film’s end highlight the acrimony and how it spilled over into bloodshed and heartache.

There is a lot to like in this beautifully shot (Ben Smithard – My Week With Marilyn – is Director of Photography), lovingly crafted work, although understanding the political machinations requires further investigation. Rated PG, The Viceroy’s House scores a 7½ out of 10.