It looks a bit like Die Hard in a hospital wing. Only the adamant John McClane has been replaced by the brave waitress Madison Taylor (Nicky Whelan) who has to save her own skin (and admittedly, that skin belongs to a beautiful, well-shaped body) while two mean-looking fellows are chasing her. And yes, the action hero par excellence, Bruce Willis, admired in days gone by for his contributions to action films and of course idolized during that period, is also present. This time, however, he’s not competing for the main prize as “most valuable actor”. His contribution is quite limited and in the end you can say it’s insignificant. A negligible character who clearly has to drag himself through every scene while running behind the facts. 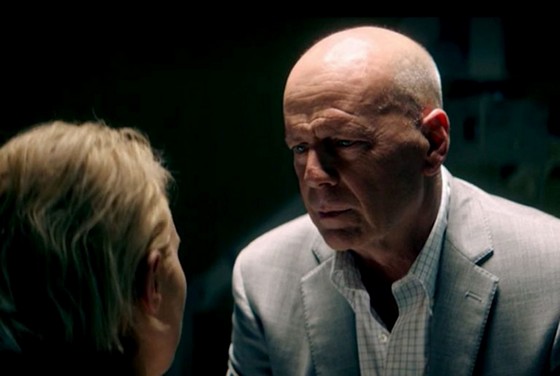 What’s wrong with star actor Bruce Willis? The sympathetic actor of yesteryear, who during his heyday was able to transform every crap film into a blockbuster, is slowly but surely working on destroying his status. In recent years it seems as if he has consciously opted for bland, uninspired B-movies with a flimsy screenplay. When looking at the list of films, with him in a central role, that I’ve seen in recent years, there’s really nothing worthwhile to discover. The films – The Prince, Vice, Extraction, Precious Cargo, Marauders, First Kill, Acts of Violence and Reprisal – are all monstrosities of movies that aren’t even worth viewing. The only movie I liked was Once Upon a Time in Venice. It’s the only film in which Willis demonstrates an unforced enthusiasm. Apparently, being an actor is precious to Willis. However, I recommend that he makes the honorable decision himself and quietly use his hard-earned dollars to enjoy a well-earned vacation for the rest of his life. And it’ll spare most of the film fans a lot of annoyance.

Anyway. So if you forget the lifeless contribution of Bruce Willis, ignore the many improbabilities, won’t see the ridiculousness in some situations, and accept the shameless copying of some corresponding situations from Die Hard, then this movie isn’t all that bad. Admittedly, there’s no longer a lot of credit left. And no doubt, lead actress Nicky Whelan deserves the remainder of this credit. Although it’s sometimes annoying to see how her condition can radically improve from one scene to the next. One moment she stumbles through a room while bleeding profusely. The next moment she seems alive and kicking again. Incidentally, I still don’t understand why the bullet wound wasn’t treated decently in this hospital immediately. Applying only an emergency bandage and waiting till after the weekend for someone to be present there to close up the wound, doesn’t seem a patient-friendly procedure to me.

So as a whole, this isn’t a terrible movie (besides the disinterested and sleep-inducing acting of Willis. Can’t stress that enough times.). The idea of ​​the incriminating bullet in Madison’s thigh is an original idea in itself. The concept of corrupt agents and the one-location idea, where the victim has to fight for her life, can’t be called very creative. This (and the resulting storyline) has been used countless times in better movies and television series. Also, the movie isn’t really intense or exciting either. Although Texas Battle (heck of an artist name) and Tito Ortiz aren’t textbook examples of actors, due to their impressive appearance and no-nonsense attitude they still provided the necessary entertainment. In short, despite its (limited number of) positive points, Trauma Center was already doomed to be offered as an on-demand film. If you are an avid Bruce Willis fan then, of course, you should watch this movie. Only I’m afraid he won’t rise in many fans their opinion.