Ben Elton is back to bring us Three Summers, an ensemble comedy that embraces the diversity of modern Australia. 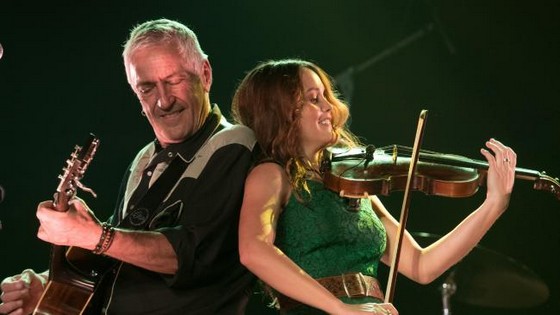 At a summer music festival – “Westival” – the feisty lead singer of an Irish folk band (Rebecca Breeds) meets a folk-music-hating Theremin player (Robert Sheehan) and sparks literally fly. Characters surrounding this awkward romance include a fiercely Aussie Morris Dancer (Michael Caton), an Indigenous dance troupe and a group of wine-loving empty nesters. That’s not to overlook a power-tripping security guard, a wannabe girl rock band and some musical asylum seekers. In fact, all manner of stories collide under the meddling eye of community radio star, Queenie (Magda Szubanski), who welcomes the campers back three summers in a row for a “folking” good time.

This is a try-hard, deliberately exaggerated, feel-good movie. A great deal of it looks contrived in an endeavour to extract maximum value from the dialogue. In fact, there’s nothing organic about the plot development.

The leads are good looking … and a number of the actors are familiar favourites. There are some amusing moments – some decent one-liners – but precious little to laugh out loud about. Put simply, this isn’t The Castle … not even close to it.

I thought Magda Szubanski was arguably the best thing about Three Summers. She wore her always cheery announcer persona like a badge of honour.

As funny as Ben Elton’s writing can be, he hasn’t cut his teeth on big screen direction (he wrote and directed Maybe Baby in 2000, his only other cinematic foray). It shows here as Three Summers has a stilted sitcom look about it.