Life can be cruel at any age, but especially when it comes to the elderly. How does one grow old with dignity? What happens when your mind starts going or when you can no longer take care of yourself?What about the burden that places on those nearest and dearest to you?

The subject is ripe for evocative and compelling theatrical treatment and that is exactly where playwright Belinda Lopez comes in. The Window Outside won the Melbourne Writers’ Theatre Award in 2012. In the hands of new, independent theatre company Wise Owl, Lopez’s prose resonates with conviction and alacrity.

Frank and Evelyn met at a dance and haven’t been parted since. Now in the twilight of their lives, the devoted and love-struck couple, played by Ian Rooney and Carrie Moczynski, are introduced to us as still being able to bust a move. But then the ugly truth is revealed. He is, in reality, grossly debilitated. She has signs of dementia.

The job of looking after them is left to one of their two daughters, Sharon (Julie-Anna Evans), who is struggling to cope with all she has on her plate. That includes troubles in her marriage and with her children. She has prevailed upon her artistic sister, Miranda (Antonia Mochan), who now lives in New York, to return home for a brief visit. It is time for some hard decisions to be made.

This is an outstanding production from a director – Liz Connors – who has a deep understanding of how to make an audience think and feel, and a cast that inhabits its characters like a second skin. The beauty in the performances comes from the fact that each is so well drawn.

As Frank, the resonance and timber in Rooney’s pipes are particularly alluring, as he adroitly moves back and forth from respectful, loving and caring to heavily impaired. Moczynski is immediately credible as his devoted wife, Evelyn, who still “hears” her husband, despite the stroke that has left him wheelchair bound, disfigured and unable to speak.

Sharon’s pain, frustration, anger and fear are palpable in a virtuoso showing by Evans. For all of Miranda’s so-called success, her journey thus far has had a certain emptiness to it. Mochan readily straddles the demands of her role to be empathetic but vulnerable. 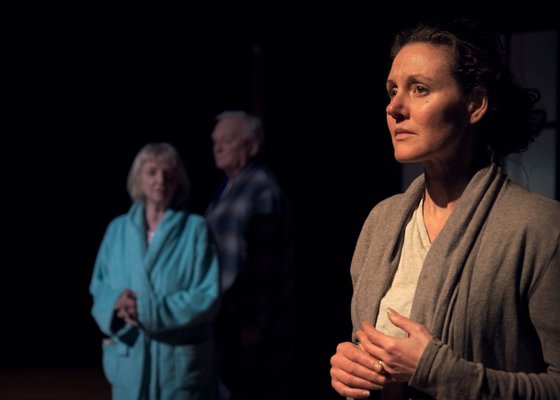 The Window Outside wouldn’t be as engaging as it is without a strong score and the technical prowess of a highly creative lighting designer in Jason Bovaird. In this case, he illuminates the simple set (the work of director Connors, who is also producer) with the deftest of touches and a diversity of palate. That includes concentrated spot lighting, black and white footage of family life shown on a divided screen above a sideboard and a silhouette finale.

All comes together magnificently in an important, thought-provoking, raw, heart-felt and honest work. The Window Outside is touring through October 2019. For details, go to www.wiseowltheatre.com.au. It is well worth catching.