There’s a great deal of warmth and good humour in filmmaker Kore-eda Hirokazu’s (who won the Palme d’Or at Cannes for Shoplifters) wry new dramedy The Truth. 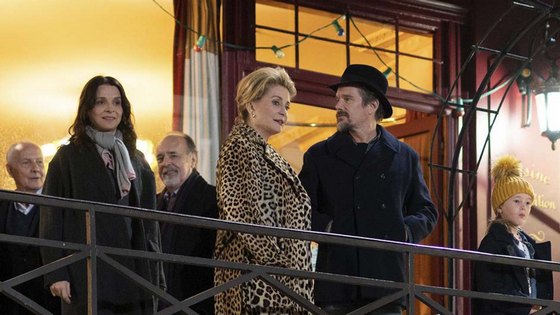 It is his first film abroad in a language not his own and he worked with a totally French crew. It also marks the first time beloved Academy Award nominees Catherine Deneuve and Juliette Binoche have featured alongside one another. They star as a celebrated actress and her estranged daughter.

Fabienne (Deneuve) and Lumir (Binoche) have a prickly relationship. Fabienne is a larger-than-life, now ageing, French cinema icon. She’s had more affairs than hot dinners and she was hardly the mother figure Lumir would have liked while growing up. Lumir, a screenwriter, lives in New York with her struggling actor husband Hank (Ethan Hawke) and their inquisitive young daughter Charlotte (Clémentine Grenier).

When Fabienne publishes her memoir the trio heads to Paris for the occasion. It comes as no surprise to Lumir that everything in her grand childhood home still revolves around her mother. As she begins to read Fabienne’s book – which mother promised to send her, but somehow didn’t get around to – it becomes clear the tome is riddled with omissions, lies and embellishments.

Those concern both Lumir and Fabienne’s relationship with the great artistic rival of her past, Sarah Mondavan, who is no longer with us. Not surprisingly, Fabienne in painted in a far more favourable light than is true. Mind you, she has no time for explanations or small talk. She’s preparing for her next film, a science-fiction drama, where she is cast in a small role alongside a rising new talent (Manon Clavel) who is touted as “the next Sarah Mondavan”.

However, Fabienne is not at the top of her game anymore. Still, she is always on show and feels she has a reputation and standing to uphold. She is uncomfortable playing second fiddle and being outshone by another star on the rise. There is no doubt Manon reminds Fabienne of her former rival, who – incidentally – Lumir was close to. Although Manon is charming and agreeable, Fabienne hardly affords her the same sentiments in return and tries to find every excuse concerning the worth of the script and her inability to live up to expectations.

Separately, Fabienne plays a joyful cat and mouse game with her granddaughter, who is led to believe she is a witch and can turn humans into animals, if she so chooses. A case in point is a turtle who bears the name of Fabienne’s former husband, her daughter’s father.

The script is witty and joyful, the performances a standout, led by Deneuve in her best role in years, which she assumes with a twinkle in her eyes. Deneuve revels in being the centre of attention – a leading actress playing an actress … just perfect. Binoche, too, is nuanced as daughter, wife and mother, carrying hurt and anger from her past, but also a spirit of forgiveness.

I loved the frequent visits to the movie set and the film within a film scenes involving three generations of actress. The question must be asked: what is fact and what is fiction?

The film has a laconic style. Manon Clavel is particularly evocative as the young actress with a big future – the consummate professional. Ethan Hawke is given a bit of a thankless role as a fish out of water but handles it skilfully, recognising he is the third wheel. I also liked Clémentine Grenier as his daughter, more than a little precocious and clearly blessed with the acting gene. Kore-eda Hirokazu has lovingly crafted a gentle, delicious celebration of family dynamics put to the test.

You could reasonably argue that not a great deal happens, but the beauty comes from the interactions.  The Truth is rated PG.