Not to be confused with Blake Edwards’ slapstick Tatiesque comedy from 1968, this black comedy and social satire comes from director Sally Potter. With films like Orlando and The Tango Lesson to her credit, Potter has long been a favourite on the art house and film festival circuit. But The Party may well be one of her most accessible films to date. This is her first feature in five years. She also co-wrote it with her regular collaborator and story editor Walter Donohue. 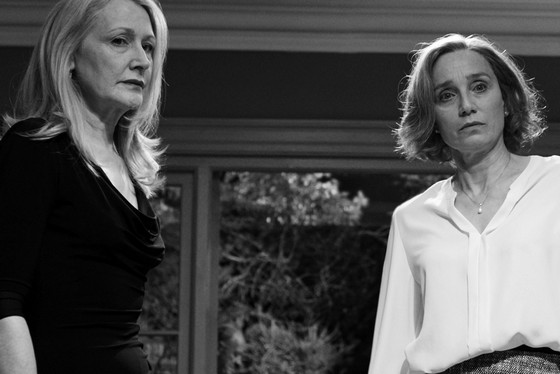 Ambitious politician Janet (played with steely charm by Kristin Scott Thomas) is throwing a dinner party to celebrate her recent promotion to the position of shadow health minister. Her depressed husband Bill (Timothy Spall) sits glumly in a chair in the living room listening to his old vinyl records. Her American best friend April (Patricia Clarkson) arrives with her husband Gottfried (Bruno Ganz), a former hippy, in tow. Also invited are lesbian couple Jinny (Emily Mortimer) and Martha (Cherry Jones), who are expecting triplets via IVF. Upwardly mobile banker Tom (Cillian Murphy) arrives late, carrying a gun and a liberal amount of drugs, which he snorts in the bathroom at every opportunity. The genial gathering though soon degenerates into acrimony, with vicious putdowns, verbal insults and shocking revelations.

The theme of a drawing room dinner party turning nasty has been a staple of theatre for decades (Who’s Afraid Of Virginia Woolf? is probably the template for this sort of thing) and The Party is very theatrical in its staging. The action is confined to a couple of rooms in Janet’s house, giving the material a quite claustrophobic feel. Russian cinematographer Aleksei Rodionov (Admiral) shot the film crisply in black-and-white. This gives it the look and feel of those bleak kitchen sink dramas of British cinema from the 50s and 60s.

Flawless performances from the small ensemble cast bring this assemblage of complicated characters to life. Thomas brings a brittle quality to her performance as Janet. Clarkson is at her cynical, bitchy best here.

This is a brisk and vicious social satire that tears strips off middle class pretentions, ambitions and social mores, and it makes for uncomfortable viewing at times. But with a running time of 71 minutes it never outstays its welcome.