“Some people think football is a matter of life and death. I assure you, it’s much more serious than that.”: Bill Shankly. The one-time Liverpool manager’s quip plays out on a far more profound level in The Keeper. And while football plays a significant role in Marcus H. Rosenmüller’s drama, it’s certainly not its sole focus.

Whoever cut the trailer for The Keeper seems to have done it a disservice. The trailer suggests it’s a kind of kitchen-sink period drama with bits of sport thrown in. But Rosenmüller and screenwriting partner Nicholas J. Schofield have crafted a story that’s far more nuanced and interesting than the trailer would suggest. 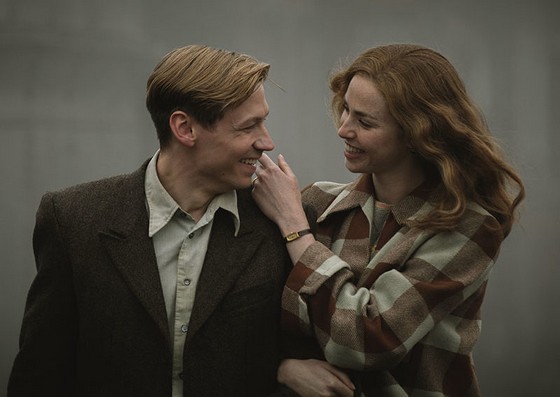 The film opens at the end of World War II. German soldier Bert Trautmann (David Kross) falls into British hands as a prisoner-of-war. He ends up in a POW camp in northern England. Amid the camp’s strictures and petty cruelties – often meted out by Sgt Smythe (Harry Melling) – Bert finds a little joy in playing football with the other prisoners. His goalkeeping “heroics” in the prison yard catch the eye of local shopkeeper Jack Friar (John Henshaw) – who happens to double as manager of the local football team. With the team facing relegation, Jack will do just about anything to avoid “the drop”. And that includes seconding Bert from the camp to play for his team. Bert’s arrival however doesn’t go over well with the team; but his skill soon wins their respect. But Jack’s daughter Margaret (Freya Mavor) is even more suspicious of Bert. With memories of the war still fresh, it’s going to take more than a few saves to abate her hostility. By season’s end though, two things have changed. Margaret has warmed to Bert’s gentle humour; and a scout from big club Manchester City has seen Bert’s handiwork.

Rosenmüller weaves together three strands of story – Bert’s football career, his home life, and his experiences in the war. Cleverly, each one feeds into (or loops back on) the other. Towards the end of the film, he pulls out a couple of big shocks. And while this isn’t melodrama, things get very emotional. The final twist neatly brings the story full-circle. In a broader sense, the film asks some big questions about moral responsibility. Rosenmüller seems to concede he doesn’t have all answers; but the questions are worth pondering.

If you know anything about Trautmann going in, it’s probably that he played an FA Cup final with a broken neck. The film stages a stunning re-creation of that pivotal game. In fact, all the football action is realistic, in contrast to many sports films.

David Kross (War Horse) gives a fine performance as Trautmann. I “bought” him as a soldier, footballer and family man. He also looks like the real Trautmann, which certainly helps. Freya Mavor (Modern Life is Rubbish) provides a counterpoint to Kross’s easy charm with a feisty performance as Margaret. Both actors have to “reach” in the final scenes; and neither disappoints. John Henshaw (Stan & Ollie) makes Friar an archetypal lower-league manager, but to good effect. Harry Melling (The Ballad of Buster Scruggs) impresses in a difficult role as Smythe; while Michael Socha has some good – if uncomfortable – moments as Margaret’s awful boyfriend.

I was pleasantly surprised by The Keeper. From the trailer, I wasn’t expecting much; but Rosenmüller elevates what could have been saccharine material into something else entirely. Nicely crafted and well acted, The Keeper something of a surprise packet.