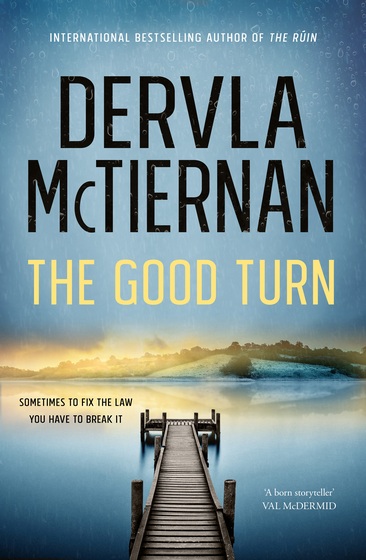 With police corruption at its dark heart, The Good Turn is another solid entry in a police procedural series that has been pure gold for crime fiction fans since the first book.

Adjusting to the new reality of his long-distance relationship with girlfriend Emma, Cormac Reilly has less patience in the tank than usual to deal with the politics that govern the daily machinations of his job.  Cormac is more than aware that his work superiors do not regard him as a team player, and the level of his concern about these opinions would seem to be decreasing with each day that passes.

Reilly’s younger colleague, Peter Kelly, is at the other end of his career and keen to make his mark in Galway police. Tasked to take the report of a child who claims to have witnessed an abduction in his street, neither Peter or his colleagues expect the incident to be the real deal.  Yet it is.

Launching out on his own to follow up a lead on a suspect, Peter is involved in a fatal shooting. Put under review and banished to Roundstone, where the obnoxious Des Kelly, Peter’s father, runs the local police station, Peter despairs that he has possibly torched his career with his ill thought out decisions. His superior, Cormac Reilly, is accused of leading the young Garda astray.

Outing #3 of Cormac Reilly devotes less page time to its hard done by Irish detective than the series priors, and The Good Turn is a better novel for it.   There is less to read here about Cormac’s relationship with girlfriend Emma also, though these inclusions are pivotal as to how the rest of the series will develop.

There is a lot going on in The Good Turn, and each plot thread is tended with great care.  The reader will need to keep sharp about whose perspective we are reading as the fact gathering continues, with both detectives Cormac and Peter working on independent concerns for much of the novel.

Strong characterization carries The Good Turn throughout, and this has been a key feature of all three books in this deservedly popular series.  Both the investigators and the investigation are given equal consideration in The Good Turn, which is immensely satisfying to anyone who prefers a holistic experience with their reading of crime fiction.

Perth based author Dervla McTiernan’s debut novel, The Ruin, was received with great enthusiasm, and won the 2019 Ned Kelly Award for Best First Crime Fiction. The Ruin has also been optioned for TV by Hopscotch Features.

The Good Turn is out now and published by Harper Collins Australia.