Premiering to rave reviews in 2015, The Dinner Party (former title The Host) is a gripping contemporary dance work from Queensland’s award-winning Expressions Dance Company. And in its 2019 reincarnation, the work, which is choreographed by internationally renowned choreographer and former Artistic Director Natalie Weir, has audience members once again absorbed, from the very first frame of its visual aesthetic. 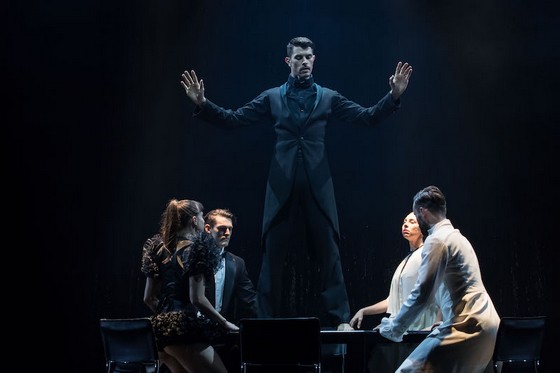 There is an art deco-ish feel to its immediate appeal, with a group of elegantly-dressed guests seated around a table against a sparkling backdrop… like a scene from The Great Gatsby, besides the bare feet. It’s just the kind of formality expected for the start of a sophisticated dinner party. Things soon relax as the night progresses, however, even though the power play between the guests is just starting.

Influential young host (Jake McLamon) is the proceeding’s initial puppet-master, evident from his initial pose upon the table to control seated guests with little but an authoritative click of his fingers. They, however, are having none of it, each set upon enacting their own agendas. And there are agendas aplenty thanks to a younger woman, The Lover (Isabella Hood), having an affair with the host, a socially ambitious but insecure Party Girl (Josephine Weise), The Wannabe (Jag Popham) trying it on with the ladies, the ambitious but charming Rival (Bernhard Knauer) for The Host’s position and the seductive but solitudinous Hostess (Lizzie Vilmanis).

From amidst this complicated relationship web, the reoccurring motifs of jealousy, ambition and attempted control continue through manipulation of movement, including within the Host’s relationship with the Hostess, with the pair joining together as a couple in breaks but at other times conveying the fractured nature of their relationship. And there is some satisfaction to seeing how things transform between then over the show’s hour long experience.

As The Host, Jake McLarnon performs in duet with each of the party’s guests, and is excellent in every instance, despite their different nuances and tones. Guest artist Lizzie Vilmanis is captivating as The Hostess, her ballet-based, old-world deportment deflating as her brave-face fades, while, in contrast The Party Girl becomes empowered by her manipulation. It is Jag Popham, however, as The Wannabe, who provides audiences with the show’s most memorable moments when, like a ventriloquist’s dummy, he is folded and flung sharply about the stage in the ultimate act of manipulated manoeuvring, resulting in spontaneous end-of-scene applause.

The Dinner Party is contemporary dance at its most dramatic, often hypnotic in the excellence of its execution of its lifts and leaps, whether in solo, duet or otherwise examination of individual character personalities and interlaced relationships. Embedded with some recognisable canonical classic call-backs, its score of recorded music by Southern Cross Soloists also contributes significantly to the spectacle, taking the mood from exuberance to playfulness and through romanticism, defeat and hollow victory.

Musical motifs assist in characterisation too, staccato detachment for the confident and calculating host and regal pomp for the well-to-do Hostess, working with Ben Hughes’ evocative lighting design to underscore tonal changes. And acclaimed Australian fashion designer Gail Sorranda’s costumes are pretty much perfect in their conveyance of character and their changing inter-personal intertwinings. Staging is also simple yet effective; the table that begins centre-stage is moved about the place and into various positions, even facilitating a duet with dancers hanging off its up-ended side.

While Natalie Weir may have moved on from her role as the dance company’s Artistic Director, it is fitting that her legacy be paid tribute in this first mainstage season of 2019 and the artistic feast that is The Dinner Party. While it may not have the narrative clarity of last year’s profoundly moving Everyday Requiem, this ambiguity and its catalyst for post-show conversations about the illusion of control is all just part of its appeal.