There have been plenty of books and movies about pandemics. Given the current reality, if you want to read about a pandemic, it may be more satisfying to read about the more idiosyncratic, literary ones. For example, in Ling Ma’s Severance, people who succumbed to the virus found themselves endlessly repeating common tasks. But there have possibly none quite so idiosyncratic as the virus which spreads in Laura Jean McKay’s debut The Animals in that Country. 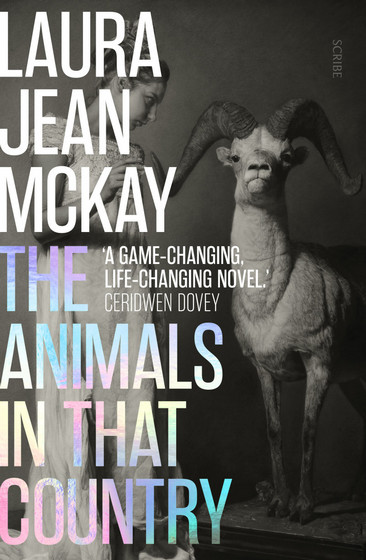 As the book opens, the Zooflu is spreading quickly and inexorably across Australia. This virus is not fatal but alongside some normal flu-like symptoms, it leaves people with the ability to understand animals, and that is where the trouble really starts.

Jean Bennett lives at an animal park in Australia’s Northern Territory and works as a tour guide. The park is run by Angie, the mother of her grandchild, Kimberly, and Jeannie shares some of the care responsibilities of that child. As news of the pandemic spreads, the park goes into lockdown, keeping out gawkers who want to come and commune with the animals. But the arrival of Jean’s waster son Lee, throws everything into disarray. He takes Kim, ostensibly to head south and talk to the whales. Jeannie, who feels herself partially responsible for this turn of events goes after them in a campervan in the company of a dingo called Sue. From that point this becomes the story of one of a bizarre buddy road trip.

The beauty of this book is that it never quite goes where the reader expects it to go. McKay zigs when the reader expects her to zag. And the whole builds to a kind of slow-moving climax involving whales that is reminiscent of a key aspect of Australian science fiction author Sean McMullen’s Greatwinter series from the late 90s/early 00s. But the majority of twists and turns are a surprise but never ultimately surprising as they are deeply embedded in Jean’s well-drawn character.

For a book that centres around the ability to understand animals, The Animals in that Country can often be a little opaque. It is all very well to have animals speaking in a poetic shorthand but if the reader doesn’t understand it then it is harder to believe that the characters in the book can understand it either. That said, there are some great insights in here from Sue the dingo to a collection of cows, rats, birds and – when Jean starts to get deeper into her understanding of animals – fleas and flies.

The Animals in That Country takes an intriguing premise and absolutely runs with it. While delivering one of the strangest road trips ever, McKay considers the nature of family, the human response to the unknown and our relationship with the animal kingdom, among other things. So that while it is not always entirely successful there is plenty here to make this journey worth taking.

The Animals in that Country is published by Scribe Publications.