A hip gangster has to get down and get dirty in Superfly.  This stylish 21st century remake of the 1972 film of the same name comes from a man who’s noted for music videos for the likes of Kendrick Lamar and Rihanna. He goes by the name Director X (born Julien Lutz). 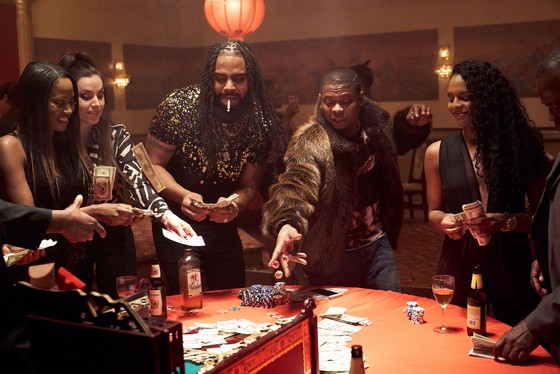 When Director X re-watched the 1970s classic, he was struck by how the film’s motifs had become part of our culture. He recognised that we live in an age of hip-hop artists like 50 Cent, Jay Z and others who’ve lived what he terms “a Superfly life”. They wanted that dream to come true, having come from circumstances where they felt they had limited options and so chose the path on the wrong side of the law. Even when they had risen to the top of the music industry, their past was often reflected in their music.

And, not surprisingly, the hip-hop soundtrack (the “Atlanta” sound) is a key component of this film. Alex Tse provided the screenplay.

In Superfly, a successful young drug dealer, Youngblood Priest (Trevor Jackson), would like one more big score and then he wants out. But, of course, it’s never that easy to draw a line in the sand. In this, case the body count continues to mount.

If you aren’t familiar with the earlier version, it takes a while to understand just what’s going on. The language used by the characters often isn’t easy to understand. Still, in time you learn to go with the flow.

Trevor Jackson is suitably well attired and spoken to make a plausible centrepiece. Lex Scott Davis straddles the demands of the role as Priest’s number one girl well – a combination of savvy and sexy.

The violence is at times intense and bloody, but towards the end it crossed the line to plain nasty. I felt it didn’t need to. That to me was a disappointment. Still, I appreciated Superfly more than I expected to.