Writer and director Rian Johnson (Looper) has delivered in Star Wars: The Last Jedi, the second film in the sequel trilogy. Johnson takes over from J.J. Abrams, who is due to direct Episode IX. 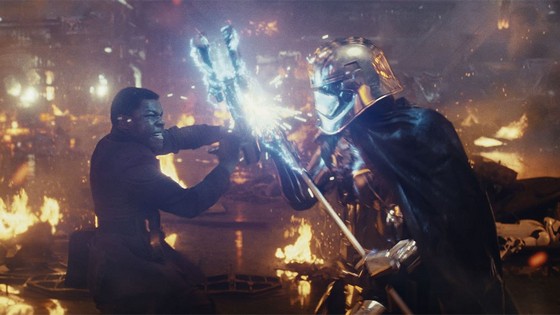 Following the events of The Force Awakens (2015), Rey (Daisy Ridley) starts her training under the surly and powerful Jedi Master Luke Skywalker (Mark Hamill), who has been in self-imposed exile. At the same time, the Resistance – helmed by General Leia Organa (Carrie Fisher) – continues its battle against the First Order, led by Supreme Leader Snoke (an unrecognisable Andy Serkis). Snoke expresses his disappointment in his right hand man, Kylo Ren (Adam Driver). Ren, you may recall, is the son of Han Solo and Leia Organa, nephew of Luke Skywater. He will have a big say in proceedings.

I am delighted to report that The Last Jedi lives up to its hype. There’s a lot going on here. Many threads come together, underlined by an almighty power struggle between the forces of good and evil. It has something not normally associated with blockbusters – nuance.

Well shot, high excitement action pieces are juxtaposed with reflective, inward-gazing scenes. The running time could readily have been reduced – to the benefit of the film as a whole – had some of the scenes been tightened. Still, there’s tension, hatred, fear and heroism.

The drama also gives way to humour at times, and generally that goes down a treat. There’s also a surprise or two in store for aficionados of the franchise. Original characters from the Star Wars pantheon work well with the new breed. Most are given liberal scope.

It is Rey’s time to find her true destiny, but that doesn’t come easily. Especially as Skywalker is determined not to play ball. Kylo Ren is a genuinely tortured soul. He and Rey dance around one another time and again. General Leia has a significant role; and it’s hard to watch the screen without sadness at Fisher’s passing. The Resistance remains in capable, if headstrong, hands. X-wing fighter pilot Poe Dameron (Oscar Isaac, who shines) and Finn (John Boyega) do the heavy lifting. Maintenance worker Rose Tico (Kelly Marie Tran) catches Finn with his hand in the cookie jar, so to speak, and the pair forges a close bond. Domhnall Gleeson is the subject of delicious derision as the power-hungry General Hux.

Star Wars favourites, like the droids and Chewbacca, also make their presence felt. All in all, there is a lot of feeling behind this episode.

So, while I thought the final product was stretched, the overwhelming sense I had was that Johnson had done a fine job with the material.