Skyscraper is essentially a cross between Die Hard (the best action film of the 80s), and The Towering Inferno (the best of the 70s disaster films). This is a big dumb action film, and no-one is better at making big dumb action blockbusters than the charismatic Dwayne Johnson; arguably the biggest movie star on the planet right now. Johnson knows what his audience wants, and he usually delivers – the recent misguided big screen remake of Baywatch notwithstanding. 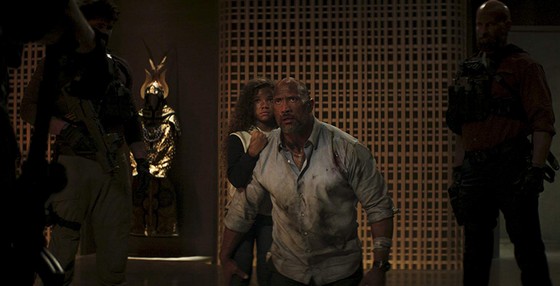 The Pearl is the tallest building on Earth, towering some 220 stories above the Hong Kong skyline. It features state-of-the-art security and safety systems. It is also, as its reclusive billionaire owner Zhao Long Ji (Chin Han) proudly states, “Three times the size of the Empire State Building”. Brought in to assess the tower’s safety systems is Will Sawyer (Johnson), a former FBI agent and special forces operative who lost a leg in an incident ten years earlier. A private security consultant, he has been employed as the Pearl’s new security officer, mainly because he is cheaper than his competitors.

But on the eve of the building’s grand opening, an armed gang sabotages the security system and sets fire to the 95th floor. The owner has something of vital importance hidden in his safe in his penthouse, which Botha (played by Roland Moller, from the superb Danish drama Land of Mine), the leader of the gang, desperately wants to get his hands on.

Will’s wife Sarah (Neve Campbell), a former naval surgeon, and his twin children (McKenna Roberts and Noah Cottrell) are trapped in the building. Will desperately tries to get into the burning building any way he can, which leads to some exciting set pieces. Not only does he have to try and rescue his family, but he has to fight off flames, falling debris, the armed thugs, and even the local police force who suspect he is complicit in the attack. Sawyer’s brawn and his artificial leg will come in handy in many a tight spot.

Writer/director Rawson Marshall Thurber directed Johnson in the action comedy Central Intelligence, and he puts him through his paces here in a physically punishing role. Having come from a background in comedy (including We’re The Millers) he proves a dab hand at directing kinetic action sequences. The film moves rapidly from one well-staged action sequence to the next; giving neither Johnson nor the audience much time to catch their breath. This is a tailor-made role for Johnson’s imposing physique and appealing screen persona. But he does bring a hint of vulnerability to the character due to his disability.

Campbell (Scream) is not a damsel in distress typical of most action movies. Her character proves quite resilient and self-reliant as she gets involved in some of the physical action while trying to save her children. The cast also includes Pablo Schreiber (Gang of Thieves), Byron Mann as a police inspector, Hannah Quinlivan as a mysterious hitwoman, and Noah Taylor, hamming it up in a villainous role.

The film has been shot by Oscar winning cinematographer Robert Elswit, best known for his collaborations with Paul Thomas Anderson. He gives us plenty of effective vertiginous shots as Johnson hangs from windows 100 stories above the ground, scales the outside of a building and even dangles precariously from the scaffolding of a massive crane.

However, the CGI effects that create the massive firestorm here a little underwhelming and the over-reliance on green-screen effects robs the drama of much of its tension.

Skyscraper is purely a disposable piece of popcorn entertainment and something of a guilty pleasure for those prepared to suspend disbelief. Yes, it’s formulaic, generic and fairly predictable, but it’s never boring! Leave your brain at the cinema door and go along for the ride.