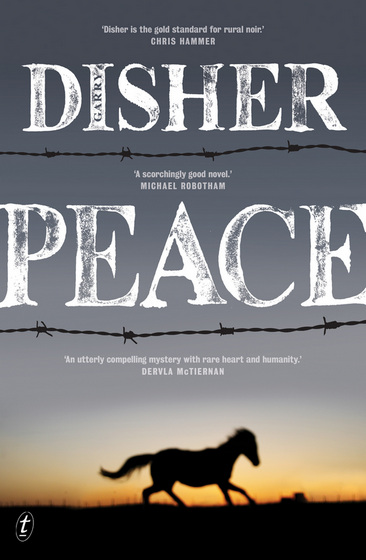 Rural noir being the big thing at the moment, it’s sad that many seem to have forgotten that there have been superbly talented authors like Garry Disher telling beautifully crafted, intelligent, and informed stories of the urban fringe, and the rural regions for many years. Peace is the second book now to feature Constable Paul Hirschhausen, following on from Bitter Wash Road. As is always the way with a carefully crafted series like this, you can read Peace first if you missed the earlier novel, although I was grateful that I’d read and remembered well the earlier novel, because Hirschhausen’s story is part of the appeal. Every single time I pick up a book by Garry Disher I’m reminded of just how assured, and deeply thoughtful a writer he is. Whilst my favourite of his series has always been the Wyatt books, I’ve developed a deep admiration for those that he sets in rural regions.

Disher was a child of the South Australian Mallee area and his understanding of the landscape, climate, sensibility and the way people fit into dryland areas of Australia is obvious, without being overt. At no stage does anything in any of the books come across as patronising or demeaning, nor does he stray into sentimental tosh or hyperbole. This world, the people in it, the daft and good things they do, the trials and joys of their lives – they are what they are, the same as they would be for any community anywhere. Just add distance, varying weather and the swaying tight-rope walk that farming economic conditions have become.

Whilst re-introducing readers to Paul Hirschhausen (Hirsch as he’s known), Disher has constructed a complicated plot that combines local interactions, far-flung interference, some confrontational animal cruelty, surprising kindness, appallingly violent murders, a family in crisis, a couple of families making the best of some complicated personal circumstances, and a browbeaten woman who finds the perfect way to handle her tormentor. Add to that Hirsch’s ongoing rubs against distant police hierarchy, a fair bit of reference back to career lowlights in the past, and a clear sense of place and culture, and you end up with a story that starts off with many possible interpretations, and comes down to the all too common occurrence of people behaving badly and then trying to pretend they haven’t. At many many levels.

Along the way there is plenty to consider about the downturn in rural economies and respect for those communities; the difficulties of incomers and long term locals learning to get along; the complications that the huge size of a rural “beat” can create; the importance of trusting your instincts and not clinging too tightly to first impressions (yes that’s a salient lesson in contradictions); and the value of a bit of local knowledge when it comes to solving crimes, and the disappointment that can sometimes bring with it.

When it comes to Australian sensibility, culture, and fringe communities we were lucky to have Peter Temple’s acute powers of observation and interaction to create some stellar, pared back, Australian fiction. We should never forget that for that whole time we’ve had Garry Disher’s local knowledge, acute observations and skilled writing ability, combined with an outstanding ability to spin a yarn in a particularly Australian tone. All show no tell, all dry and beautifully pared back, all true, and all so very elegantly delivered.

Peace is published by Text Publishing.