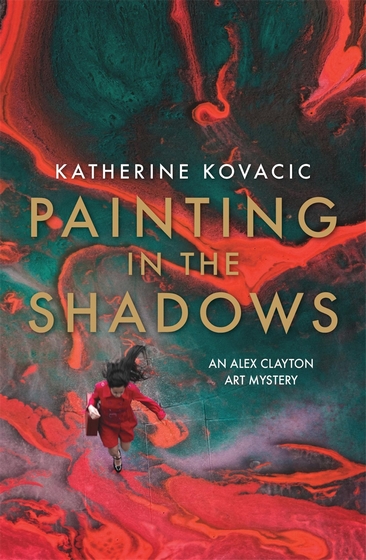 Katherine Kovacic’s Alex Clayton series (all two books of them so far…) could be used as a teaching tool for aspiring Australian crime novelists on achieving balance between personal backstory and plot, and how to craft a realistic strong female lead character, because they are both extremely good examples of that and much more. There’s always been a bit of chatter about second novel syndrome and it’s hard to ignore as there have been some amazing debuts followed up by something that’s not as strong, confident or unsurprisingly as original, but Painting in the Shadows has none of the syndrome symptoms, and all of the impact of the initial novel.

I wasn’t sure where Kovacic would take Clayton, her best friend John Porter, and their art-world based shenanigans in this second novel. The collapse of a museum worker, damage to a cursed painting and the death of a senior conservator is the perfect scenario pulled off with considerable aplomb (helped by Kovacic’s obvious knowledge of art history), combining wit, some personal and professional angst and enough personal jeopardy to make the whole thing believable, tense and perfectly balanced between plot and character, personal and professional, career and relationships.

Alex is from the prone to wisecrack her way through life category of accidental PI’s, and her career has been directly impacted by past events at MIMA which are hinted at early, and expanded as the plot moves forward. Porter on the other hand, is a respected freelancer whose expertise is needed when one of the centrepieces of a new exhibition – the cursed painting – is damaged in an accident. This gives him an in to the backrooms of the museum and it’s here that together they uncover a very odd photograph and a startling discovery. Fraud is not unknown in art circles, and this one appears to have big implications in the Australian art world in particular, although finding the perpetrator isn’t as easy as you’d hope as there’s more than enough red herrings stinking up the place to provide confusion, and that aforementioned jeopardy. Clayton and Porter are a great pairing, and the idea that they are mostly just old friends with a propensity to be a bit nosy is an elegantly simple device to get them “into” an investigation.

When reviewing the first novel (The Portrait of Molly Dean) I noted that the real-life subject of the portrait – Molly Dean – and Alex Clayton had a few similarities. Both strong, determined individuals and whilst Porter might not have quite as much of either of those qualities, the friendship between he and Clayton feels real and genuine. Mind you, the original review also mentioned both women could be daft and clever all at the same time, and it certainly feels like Porter’s stepped into that aspect of the personality match quite happily.

After two books, the Alex Clayton Art Mystery series is shaping up to be one of the good ones. Make sure you read them both if you’ve not had the pleasure before. Oh, and a hat tip to the cover designer Nada Backovic, it’s an absolute stunner.