Guess it wasn’t that simple to do this. Making a film that focuses solely on an American marine named Mike (Armie Hammer) who stepped on a landmine and who doesn’t dare to take any further steps. For 90 minutes, there’s nothing else to see than this soldier who has to wait 52 hours for a patrol to help him. Help that comes too late for his partner Tommy (Tom Cullen). He won’t be able to break the record on the 100 metre sprint, as both his legs are spread over a few square meters after walking on a landmine himself. And, in my opinion, the thought of a leg-less existence was too much for him as well. And now Mike is standing, kneeling and balancing there in the middle of the desert on an unexploded landmine, exposed to the elements of nature and from time to time deep in thought. The ultimate survival test. 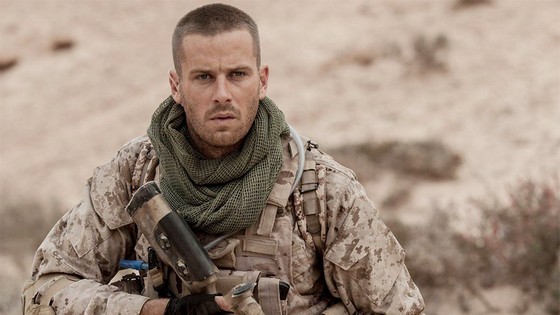 So, don’t expect real action-packed scenes in this movie. Only the delusions and flashbacks as Mike gets more and more tired, are presented in multitudes. And an odd, funny looking Berber shows up occasionally to bring water and have philosophical conversations with Mike. And afterwards he disappears again over the next dune. Whether this Berber is real or just a figment of his imagination, is hard to say. Certainly, he gives Mike something to hold onto so he won’t go insane because of dehydration, the heat and lack of sleep.

Hammer’s performance is solid and convincing. A man who tries to survive in dire circumstances and at the same time tries to come to terms with his past. A childhood filled with domestic violence from an aggressive, alcoholic father. To be honest, it’s not hard to be the star of a movie when you’re actually delivering some kind of solo performance and there’s no other role that has a decisive impact on the movie. In this case, Hammer has the stage completely for himself and he can demonstrate the talent he has as an actor. And that is the most commendable of this film. Despite the intriguing concept, the content is too limited.

You can also interpret this movie in a metaphorical way. Everybody tend to end up in a so-called mine field once in his lifetime. A difficult period in which making a thoughtful decision is necessary. But because of the fear of taking risks, one freezes and is scared of taking that next, crucial step. Sometimes it may be advisable to take a next step, although there are consequences, instead of standing still. A tremendous dilemma Mike is facing and something the enigmatic Gerber tries to explain to him all the time. Due to the subject and the total lack of action, you may call this a boring movie. At one point, one hopes that this bloody landmine would explodes. Just to stir up the tension. And yet, this movie managed to hold my attention and curiosity.

Never thought that a non-exploding landmine could be so intriguing. And again, praise for Armie Hammer and his commendable performance.

Mine is now available on DVD, Blu-ray and via on-demand services.