Imagine you’re the partner or child of a soldier who’s sent off to war. How would you feel? Military Wives is inspired by the true story of a group of women in that situation. In this case, their partners were deployed in Afghanistan. 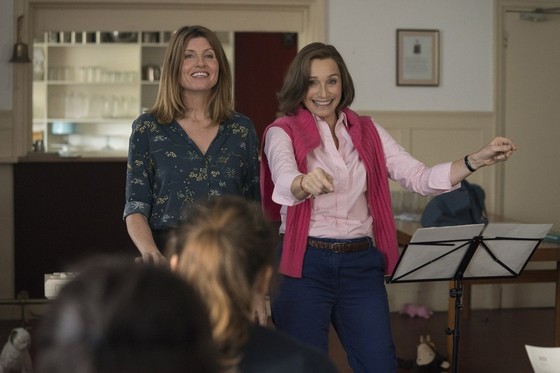 Kate (Kristin Scott-Thomas) and Lisa (Sharon Horgan), are in a power struggle. They’re wives of officers, and want to keep the other women busy, distracted and engaged. They take a totally difference approach – Lisa is populist and impromptu; Kate, highbrow and proper. They agree to form a singing group, although – again – they have different ideas of what that means. It becomes the first UK military wives’ choir.

From a very shaky start, the singers make their presence felt, even though they continue to think of their nearest and dearest in battle. While Kate doesn’t let down her guard and keeps a stiff upper lip, she’s still coming to terms with the death of her son. Lisa, on the other hand, struggles to connect with her rebellious teenage daughter, Frankie (India Ria Amarteifio), who is close to her dad.

Military Wives is too staged-managed to have a full ring of truth to it, but it still has impact. I shed tears. It lurches from dramatic to comedic and sentimental, although it doesn’t dwell on loss.

The two leads are well cast and play convincing adversaries, even if I didn’t really buy their eventual meeting of minds. Around them is a colourful troupe of secondary players.

Military Wives could quite easily have been a far more harrowing tale. Instead, it’s pitched as feel-good entertainment that many will appreciate. That’s not surprising then when you know Peter Cattaneo, who was at the helm of The Full Monty, directs.