Despite the fact that many audiences members were born well after ABBA’s heyday, the pop anthems interwoven with a sweet story of love and family still generate smiles, whoops and applause after every performance. 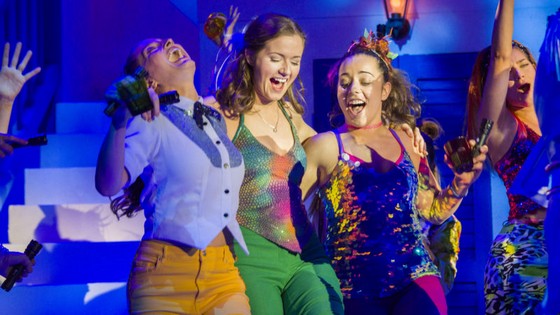 If you’re not familiar with the 70s sensations who were Benny, Bjorn, Agnetha and Anni-Frid; Mamma Mia! is a musical using 22 of the the biggest hits from the ABBA songbook. They’re set into a love story by Catherine Johnson. The film version was also a hit for Meryl Streep, Pierce Brosnan and Amanda Seyfried. You’ll be able to catch the sequel in cinemas later this year.

But back to Brisbane, and the joyous, energetic show currently filling QPAC.

Mamma Mia! has one of the most varied casts I’ve seen in a musical in a long time. It boasts a stellar lineup of Australian performers, and effectively the show has 7 leads – mother Donna, daughter Sophie, ‘aunts’ Rosie and Tanya, plus three potential Dads Harry, Sam and Bill. They are supported by a large ensemble and supporting cast who are just as impressive in their dancing, singing and comedic delivery.

There are laughs aplenty, sighs and knowing nods as the characters navigate a very tricky paternity situation. But they always have a song in their hearts and a twinkle in their eyes.

Standout performers are Alicia Gardener and Jayde Westaby as Donna’s best friends and Sophie’s aunts – they essentially steal most of the scenes they appear in. Natalie O’Donnell as Donna is wonderfully engaging and a stunning vocalist; while new sensation Sarah Morrison shows her considerable talents as the blushing bride to be.

The simple set transports audiences to the Greek Islands quite effectively. Colourful costuming and energetic choreography inspire the party atmosphere – boardshorts and cut-off jeans all the way. The ‘flipper’ sequence is a personal favourite among dance numbers. And children of the 70s will remember the jumpsuits and flares with fondness and possibly a few cringes. 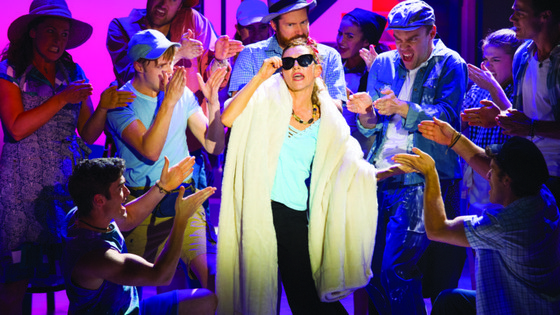 Brisbane is Mamma Mia’s second stop on a national tour, having already wowed Canberra. It moves on to Sydney in February.

Abandon your cares at the door and you’ll jump into a rollercoaster of sequins and spontaneous bursting into song. This is a perfect night out for young and old. ABBA fan or not – you won’t be able to resist the infectious fun and frivolity of Mamma Mia!

Mamma Mia! The Musical is playing at the Lyric Theatre, QPAC in Brisbane until 4 February 2018.