The painfully unfunny Little is a variation on the body-swap formula that drove films such as Big and Suddenly 30. There’s little about this dud to recommend it to audiences. 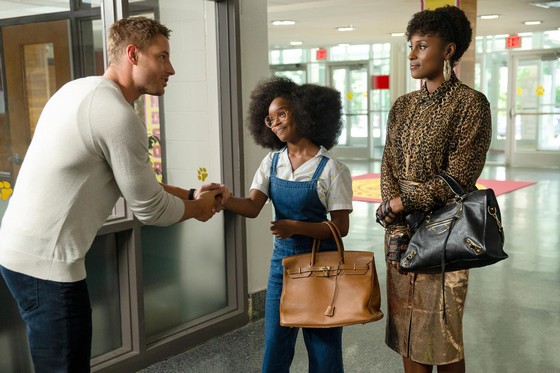 Jordan Sanders (Regina Hall) was a nerd when at school. But twenty years later, she’s a high-powered millionaire. Jordan has become a ruthless, work-obsessed executive in a tech company. She’s overbearing and cruel to her staff. But now she’s under pressure to develop an innovative new app for an obnoxious major client (Mikey Day) or else he’ll take his business elsewhere. Stevie (Marley Taylor) a young girl and aspiring magician witnesses Jordan’s mean-spirited acts. Stevie waves her magic wand and wishes that Jordan could experience what it feels like to be picked on. Due to this unlikely act of magic, Jordan is transformed back into her former precocious 13-year old self (Marsai Martin) with a big afro hairdo and nerdy glasses.

Before long it’s back to middle school for Jordan, and she discovers it’s just as unpleasant an experience now as it was back then. She has to deal with a clique of mean girls, and she also befriends a trio of misfits who themselves find it hard to fit in. And she also comes to an understanding of her overworked and underappreciated personal assistant April (Issa Rae).

So far, so formulaic. But Little becomes a bloated mess with a run time of nearly two hours. Tracy Oliver (Girls Trip) provides the script along with director Tina Gordon (who also wrote What Men Want). Gordon’s direction is pedestrian, and the film is tonally uneven, with many moments falling flat. Some cringeworthy, overly sexualised scenes are clearly unsuitable for the target audience of teenage girls.

However, there is one highlight and that’s the marvellous performance of the pint-sized 14-year old Martin (Black-ish), who’s also credited as one of the producers. She apparently had the idea for this role-swap comedy when she was 10 years old and managed to pitch it to a major studio. Martin brings plenty of sassy attitude and maturity to her scene-stealing performance. She’ll go far if she can find good roles in the future. Rae (The Hate U Give) is also excellent as the beleaguered April who bears the brunt of Jordan’s putdowns. Her comic timing and delivery of one-liners are spot on. She develops a wonderful but prickly chemistry with Martin.