Silvia (Sanín) is a single mother of a four-year-old son, Antonio (Antonio Martínez). Life is a constant struggle for her. She has a responsible job, as Deputy Legal Director of a government department. At the same time, she and her sister Majo (Alejandra Sarria) are caring for their mother, Leticia (Leticia Gómez*), who’s terminally-ill with lung cancer. Silvia and Leticia have never seen eye-to-eye. That doesn’t mean that Silvia doesn’t love her mother, but they constantly argue. 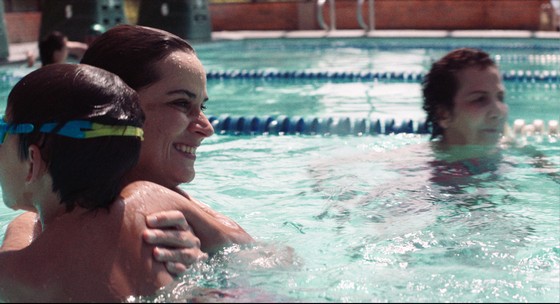 After reluctantly attending a party with a dear friend, Silvia sees a guy, Abel (Vladimir Durán), she can’t stand. Their only previous encounter was when Abel interviewed Silvia on radio, asking some hard questions. Those came in the wake of Silvia’s department being accused of misuse of public funds. Understandably, with this unexpected second meeting, Silvia wants nothing to do with Abel. But he manages to win her over and the pair begins a relationship (which her mother rails against).

Silvia’s plate is full. Her son is playing up at school, her boss is demanding and decidedly slippery, and her mother’s condition is worsening. But there’s more. Just who is the father of Silvia’s son and why isn’t he in the picture?

Litigante may not be the most relatable or stimulating title. But this is an insightful snapshot of a messy but ordinary, upper middle-class life. The stresses Silvia feels are palpable. There is a sense of waiting for the next brick to fall. All the while Silvia is fighting for more order, for more responsibility to be taken by those around her. At times her ability to cope is called into question. That isn’t helped by the constant haranguing from her mother, who begins by stridently refusing treatment and continuing to smoke.

Litigante feels raw and that boils down to not only Sanín’s performance, but those of the whole cast. In particular, it’s impossible to ignore the depth of feeling displayed by Gómez as the mother who knows the end is near. Leticia’s personality is combative and she wears it as a badge of honour. Vladimir Durán portrays Silvia’s new boyfriend as a fun-loving bear of a man.

I dare say many of us will relate to the scattered life Silvia is leading. No straight lines here – just scribbles on a page. Plaudits to Marie Amachoukeli-Barsacq, Virginie Legeay and Franco Lolli for the realistic script; and to the latter for his direction of this Spanish-language film.

While Litigante won’t suit all tastes, I found it a compelling tale about trying to restore a sense of order and balance that many of us struggle with. And it’s certainly true to say that for the vast majority, the human condition simply doesn’t allow for order or balance.

* Leticia Gómez, who plays Silvia’s mother, is Franco Lolli’s mother. She was in remission from a cancer battle of her own while filming. And Carolina Sanín – a well-known writer and feminist figure in Colombia – is Lolli’s cousin. Neither are trained actors.