Guy Ritchie (The Man from U.N.C.L.E.) puts his own take – a gritty, modern edge – to the classic Excalibur myth and the story of King Arthur and the Knights of the Round Table in King Arthur: Legend of the Sword.

Arthur is not yet king, instead a ruffian, a thoroughly reluctant hero compelled to discover his true destiny, even as he fights against the very monarchy he is meant to rule. When the child Arthur’s father is viciously murdered, Arthur’s uncle, Vortigern (Jude Law – The Talented Mr Ripley), seizes the crown. Robbed of his birthright and with no idea who he truly is, Arthur is brought up the hard way in the back alleys of the city. But once he pulls the sword from the stone, his life is turned upside down. 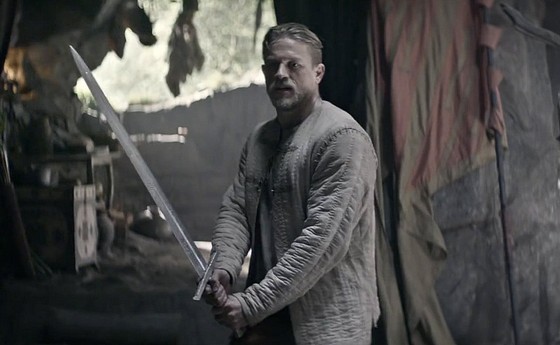 Ritchie – who also co-wrote and produced the film, says the best narratives “take a man on a journey that transcends his limitations and allows him to evolve from his most basic nature into someone worthy of a bigger life. In our version of the story, Arthur’s life starts small: an urchin in a brothel, running the streets, learning to fight and dodging the law with his mates. Then the actions of others …force him to expand his vision of who he could be.”

Of course, no King Arthur story would be complete without a bit of magic. Instead of dragons, however, the filmmakers wanted to create a new and unique mythical world, with “elephants longer than a football field and snakes as big as subway trains” says co-writer and producer Harold.

A convoluted storyline (it takes a while to work out what is going down) piggybacks onto a special effects blockbuster. This Arthur is a most unenthusiastic starter to the king-making stakes. His irreverence brings Hunnam’s portrayal very much into the modern trend of filmmaking. For his part, Law is positively Shakespearean.

The film is a win for CGI aficionados – those that will appreciate castles being brought down by woolly mammoths and will rejoice at fire engulfing evil incarnate. In fact, a great deal of sorcery surrounds all that goes on. So, this is a showpiece for wizardry and fighting, where, for lengthy patches, verbiage is kept to a minimum and action predominates. Ritchie has thrown the kitchen sink at King Arthur, but it did little for me. The words “hocus pocus” and “bunkum” come to mind.