In Glass, filmmaker M Night Shyamalan brings together the central characters from 1999’s Unbreakable and 2016’s Split for a climactic showdown that brings this unofficial trilogy to a close. At the end of Split, Shyamalan did include a post-credits sting hinting that the film was a part of the Unbreakable universe. But he had to wait a couple of years to bring the project to fruition as it involved the cooperation of two major Hollywood studios. 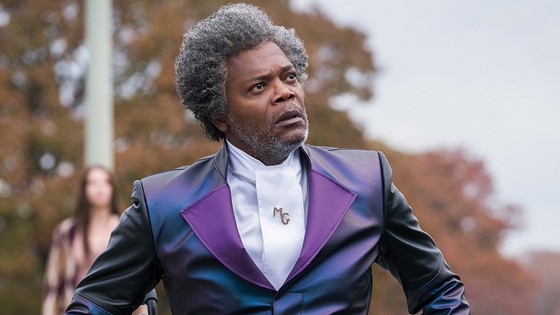 In Unbreakable, Elijah Price (Samuel L Jackson) was trying to prove the existence of superheroes in the real world. In Split, Kevin Crumb (James McAvoy) was a serial killer with multiple personalities and superhuman strength. In the years since he was the sole survivor of a fatal train crash engineered by Price, security guard David Dunn (Bruce Willis) has become something of a reluctant hero, a dark knight, a vigilante prowling the streets of Philadelphia at night taking down muggers and other low life criminals. He operates his own security firm with his son Joseph (Spencer Treat Clark, reprising his role from the original film). Using his supernatural abilities, Dunn is on the trail of Crumb who has recently kidnapped four cheerleaders and is holding them captive in an abandoned factory somewhere in the industrial district.

When Dunn finds Crumb’s lair and rescues the four girls, he and Crumb are captured by Dr Staple (Sarah Paulson) and taken to a secure wing of a local asylum. Staple is trying to discredit Price’s theories about the existence of superheroes, and tries to convince both David and Kevin that their powers are the result of delusions. When the heavily sedated Price sees David in an adjoining cell, he awakens from his stupor and orchestrates a showdown between the three of them. The clash though also reveals many deep personal secrets that bind the three men together.

Since he hit the big time as a filmmaker with his supernatural thriller The Sixth Sense in 1999, Shyamalan has always included an obligatory twist in his films. But since Unbreakable, his career has been on a downward trajectory, and hit its nadir with the awful The Last Airbender and After Earth. With the creepy but imperfect The Visit and Split Shyamalan seems to have been on a bit of a comeback and a return to form. Both Unbreakable and Split were great stand alone films, and combining them in this way seems like a bit of an afterthought intended to capitalise on the good will both films earned at the box office and with audiences who thought he had lost his mojo a while ago.

Shyamalan makes good use of some Philadelphia locations, and the production design from Chris Trujillo (Stranger Things) is quite good. The film has been nicely shot by cinematographer Mike Gioulakis (who also shot Split).

Shyamalan still uses clever misdirection to put the audience off guard. However, his endings still tend to be a bit problematical, and the film falls apart with its third act, which is heavy handed and lacks his usual subtlety. There is also a lack of genuine suspense here, and the plotting lacks credibility in parts.

Jackson (the Avengers films) brings his usual gravitas to his role as the fragile wheelchair-bound Price and imbues his character with a casual air of menace as he orchestrates events. McAvoy (Atomic Blonde) replicates his intense tour de force performance from Split, finding a few new personalities as he seamlessly switches identities, but finds nothing new to bring to the character and he is less interesting this time around. And Willis (RED 2) just looks bored the whole time. Anya Taylor Joy (Thoroughbreds) reprises her role as Casey, the one girl who was able to charm Kevin and get under his skin and escape his clutches.

Glass is a fair successor to Unbreakable and Split, which many people consider to be among his best films. But ultimately this third film in the series is rather unnecessary and a bit of a disappointment.