The well-being of a brilliant seven year-old is on the line in the feel-good weepy Gifted. 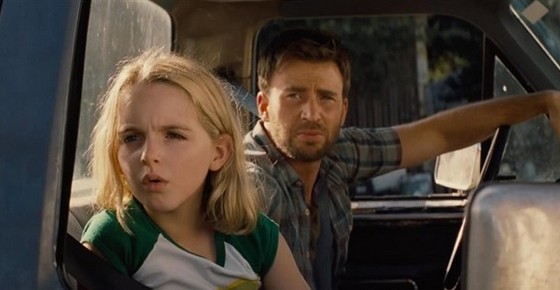 Frank Adler (Chris Evans) is a single man raising his spirited young niece Mary (Mckenna Grace) in a coastal town in Florida. Though Mary is a child prodigy, Frank’s intends that she lead a normal life. His aim is thwarted when the youngster’s command of mathematics comes to the attention of the child’s formidable but estranged grandmother Evelyn (Lindsay Duncan). Evelyn’s plans for her granddaughter threaten to separate Mary and Frank.

As family tensions flare, uncle and niece find support in Roberta (Octavia Spencer), their protective landlady and best friend. Then along comes Mary’s teacher Bonnie (Jenny Slate), a young woman whose concern for her student soon develops into a relationship with her uncle as well.

The film plays with our emotions and makes no bones about doing so. It is obvious, but effective, in soliciting a response. Pieces of the background are gradually revealed and plot twists are many. Some of these are more credible than others. There’s no doubt about the outcome we want; and the purpose of the picture is to shake up the element of certainty.

The film overloads its “nice” characters – the kid, her uncle, her teacher and the landlady. The “wicked witch” is the grandmother. Given the hostility between her and her son, their relationship could (should) have been more combative and explosive. I can see aspects of Kramer vs Kramer and a Nicholas Sparks novel in this.

I thought young Mckenna Grace was terrific as the precocious but charming central character. Notwithstanding my reservations, for the most part I liked Gifted, which is directed by Marc Webb (The Amazing Spider-Man). I dare say it will find particular favour among a female skewed audience. Rated M, it scores a 7 out of 10.