Geostorm has to be one of the most ridiculous disaster movies in a pantheon of clunkers in the genre. Even the special effects are severely underwhelming.

After an unprecedented series of natural disasters threatened the planet, the world’s leaders came together to create an intricate network of satellites to control the global climate and keep everyone safe. But now, something has gone wrong. The system built to protect the Earth is attacking it. It’s a race against the clock to uncover the real threat, before a worldwide geostorm (a conflagration of storms) wipes out everything … and everyone. 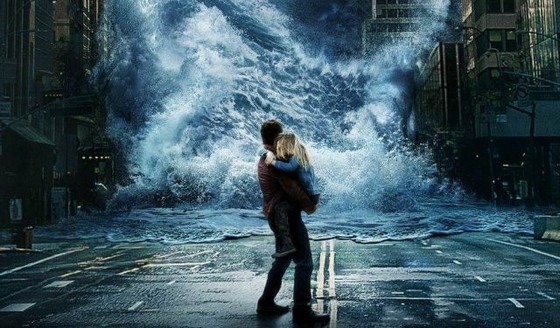 Gerard Butler (300) stars as Jake, a scientist who, along with his brother, Max, played by Jim Sturgess (Cloud Atlas), is tasked with solving the satellite program’s malfunction. Abbie Cornish is Secret Service agent Sarah Wilson, part of the security detail guarding the President (a role filled by Andy Garcia); while Ute Fassbinder is the chief scientist on board the international space station. Ed Harris is cast as the Secretary of State.

Dean Devlin, the writer and producer of Independence Day, makes his feature film directorial debut. Based upon what he has dished up here, Devlin has a way to go.

The storyline (namely, the imminent end of the world) is all too familiar. The plotting is pedestrian, the acting is far from convincing and, of course, so are the computer-generated elements. Yet again, the future of the planet is left to the final second of a countdown clock to determine. Oh, p-l-e-a-s-e!

You don’t have to wait long for the disappointments to arrive. Jake’s 13-year-old daughter’s voice-over in the opening sequence is barely coherent, all but drowned out by other sounds. As a portent of what is to follow, it couldn’t be better (I mean “worse”).

The longer the movie goes the more outrageous it gets. I didn’t buy the relationship between Max and Sarah Wilson, which was severely lacking in chemistry. Ed Harris and Andy Garcia were both particularly wooden. Gerard Butler and Jim Burgess did what they could, given their derivative roles.

So, lots gets destroyed by water and fire and wind. Nothing here feels the least bit fresh. Geostorm is B-grade fare. It’s best tolerated on a large screen, so you can pick even more holes in it, including all but laughing at the iterations of cities being taken out. Somehow that provides perverse pleasure. Geostorm scores a 5 out of 10.