An epic adventure and love story featuring the key voice talent from the original mega-success (2013), Frozen II is a strong follow-up. If Frozen ended with happily ever after, this is effectively the day after happily ever after, when life gets in the way. 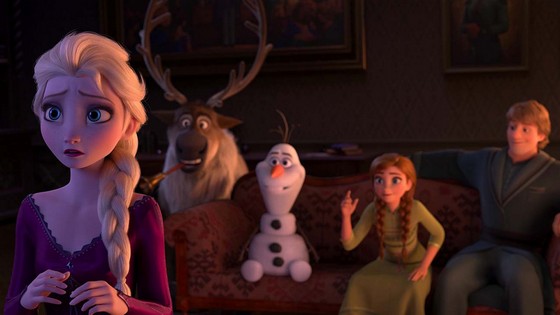 All appears ship-shape in the kingdom of Arendelle, with Elsa (Idina Menzel), Anna (Kristen Bell), Olaf the snowman (Josh Gad), Kristoff the ice harvester (Jonathan Groff) and Kristoff’s reindeer Sven enjoying their time together. But then Elsa hears a mysterious voice and follows it, unintentionally awakening the elemental spirits of Earth, fire, water and air. That forces everyone in the kingdom to evacuate to safer ground. The quintet embarks on a dangerous journey into the thick mist of the enchanted forest to get to the bottom of just what’s going on.

There they encounter warring factions – Northuldran and Arendellian. This dates back to a story Elsa and Anna’s father, King Agnarr, told them about their grandfather building a dam in the enchanted forest and a resultant battle that enraged the spirits. Elsa and Anna must try to secure the future of Arendelle and bridge the divide between Northuldran and Arendellian.

Along with the key cast members, directors Chris Buck and Jennifer Lee are back. Lee also provides the screenplay. A lively narrative arc, striking animation and ear-pleasing music are the hallmarks of Frozen II. Importantly, it has a historical context. Overcoming adversity and dealing with conflict are at its core.

Once more the very different sisters have to join forces to save the day. They’re joined by the brave Kristoff, who can’t find the right time or words to ask Anna to marry him – a subplot that continues throughout the sequel. The film also introduces us to a cute frog that triggers fire.

Frozen II pushes all the right buttons. It works as a stand-alone picture if you’re one of the six people in the country who hasn’t seen the original. But seeing the first instalment can only create a richer experience.