A crowd pleaser based around sea shanties. That is Fisherman’s Friends, set in the picturesque fishing town of Port Isaac in Cornwall. 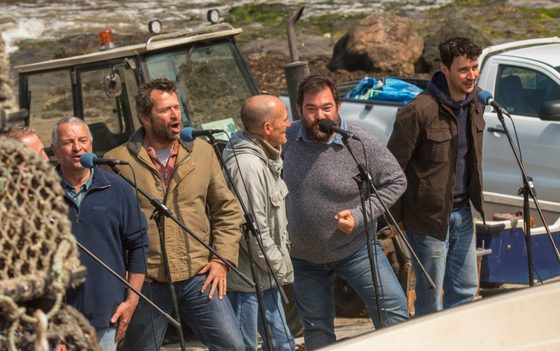 Danny (Daniel Mays) is one of a group of four lads from London who work in a music talent agency. They decide to spend a stag weekend in Port Isaac and rock up as if they own the place. They are scorned by the locals as they represent the invading hordes of outsiders who flood the Cornish seaside every year. Almost immediately the quartet runs into trouble.

Then, as a joke, Danny’s boss, Troy (Noel Clarke), tasks him with signing a local group of a cappella singing fishermen. Not surprisingly, Danny struggles to gain the respect and enthusiasm of the unlikely boy band. But by the time he realises that the joke is on him, the unique charm and passion of the group and the townspeople have captured Danny’s heart.

The most hard-headed of the fishers is Jim (James Purefoy), who works hard, as do the others on board his small boat, including his father Jago (David Hayman). Jim single handedly brought up his daughter, Alwyn (Tuppence Middleton), after his wife left him. Alwyn is a single mother … after her marriage broke down in acrimonious circumstances. Danny gradually ingratiates himself into the lives of the townsfolk, although it isn’t all smooth sailing (if you pardon the pun).

The origins of the story that became Fisherman’s Friends date back to 2010 when something extraordinary happened.  So, the movie is a feel-good comedic drama based upon fact.  After a slapstick and less than convincing start, the film is turned on its head and becomes a joyful watch. That is, in large part, due to the characters that populate the picture … and I mean characters.

They are larger than life personalities who value family, friendship and community above all else. The leads all represent good value, effortlessly morphing into the roles they inhabit.

Mays does most of the heavy lifting and proves himself most adept. Purefoy does “gruff” well, while Middleton shows strength and spirit.

And, I loved the music and the harmonising thereof.

There is a great deal of warmth and heart about Fisherman’s Friends, which Chris Foggin appears to have had a good time making.