Damien Chazelle shows why he’s regarded as one of the most promising directors of his generation with First Man. After Whiplash and La La Land, this is his third knockout movie in a row – and one that will likely put him in the Oscars frame once again.

This is Chazelle’s most mature film to date and you can see the growing confidence in his work. He’s willing to take risks, and – like his subject – to push the boundaries with this film. But he does so with an emerging mastery of the medium. All that said, I do question whether this will smash any box office records because First Man is masterful, but not entirely accessible. 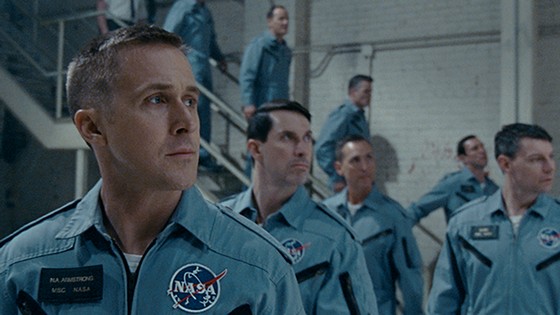 Chazelle uses an oblique, episodic style that some may find distancing. He also doesn’t deign to fill in all the gaps. As such, this is an impressionistic portrait of Neil Armstrong, the first man to walk on the Moon. It’s not a detailed biopic; nor is it in any way a complete run-down of the Apollo program. But it tells you everything you need to know about a famously humble person who made an indelible mark on history.

The film opens in 1961 when Armstrong (Ryan Gosling) is still a test pilot for the Air Force. Frustrated by a lack of opportunity, he switches to NASA. There, his no-nonsense approach and attention to detail are appreciated. But at home, things are rather different. Tragedy has already rocked the household, and the new demands of the space program place additional strain on Janet Armstrong (Claire Foy) as she struggles to cope with the couple’s two young sons. But Neil is doggedly persistent, even as the “space race” takes the lives of some of his colleagues.

Josh Singer (Spotlight) adapts James R. Hansen’s authorised biography (titled First Man: The Life of Neil A. Armstrong) for the screen. He’s done a brilliant job of balancing the “action” of the space program with the travails of domestic life. But Chazelle elevates the material with a striking visual style, ably assisted by DOP Linus Sandgren (Battle of the Sexes).

He injects the film with a kind of “rhythm” where chaotic scenes (many shot with hand-held cameras) are counter-pointed by scenes of absolute stillness. I’m not a big fan of hand-held, but I think Chazelle uses it to great effect here. A warning though: some scenes are can be disorienting to the point of inducing motion sickness. If you’re sensitive to that, sit at the back of the theatre. Many of the space sequences are so intense, I found myself unknowingly gripping the armrest of the cinema seat. Sandgren employs a washed-out look to give the film the “feel” of the 1960s. And regular Chazelle collaborator Justin Hurwitz produces another brilliant score for the film.

The subject-matter invites comparisons with films like The Right Stuff or Apollo 13. But First Man, as the title suggests, is much more interested in being a character study of the titular “man”, than it is in giving the audience a history lesson. So this film really stands on its own.

Ryan Gosling is excellent as the taciturn Armstrong. Although he’s been there before (think, Drive) he still manages to convince that there’s a lot going on behind the character’s stoic exterior. Claire Foy breaks out of her typecast of playing British royalty as the grounded (no pun intended) Janet, and delivers one of the best performances of her career. The supporting cast of astronauts is large and they often drift in and out of the film. However Corey Stoll as the ebullient Buzz Aldrin, Australian Jason Clarke as Edward Higgins White and Ciaran Hinds as program boss Gene Kranz all make an impression.

First Man is one of the most powerful films you’re likely to see this year. Although I realise some will disagree, I also think it’s one of the best. But whether you love it or hate it, you need to see it.